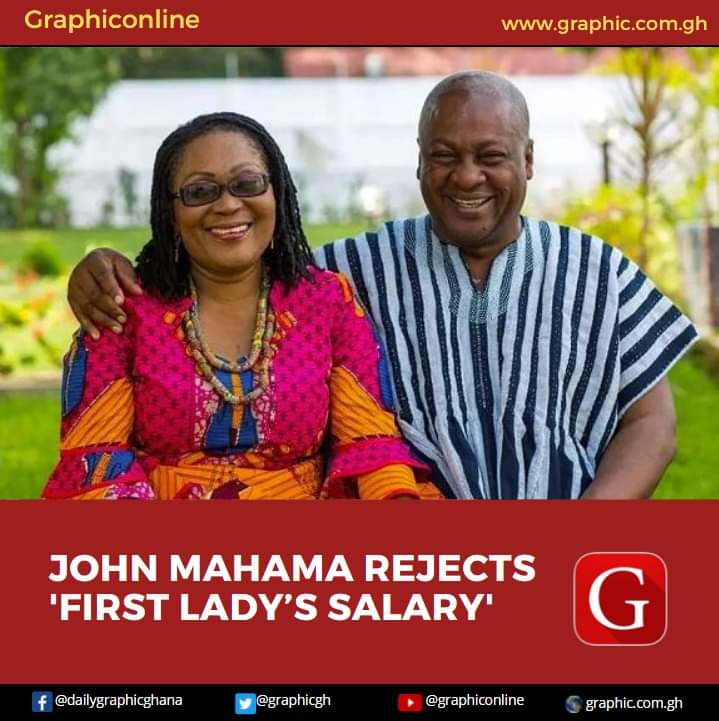 Three private citizens of Ghana have petitioned Commission on Human Rights and Administrative Justice (CHRAJ) to immediately investigate payment of allowances to past and current presidential spouses between 2009 and 2016 pertaining to the regimes of their husbands, demanding a total refund of all the payments by such beneficiaries particularly Mrs Lordina Mahama, except Mrs Ernestina Naadu Mills and Mrs Matilda Amissah-Arthur on grounds that they are widows.

Mr Keskine Owusu Poku, Mr Victor Osei-Poku and Mr Michael Essel-Mills,
who have initiated the action at CHRAJ solely on the grounds of their
interest in governance, politics, constitutionalism and rule of law are demanding allowances paid from 2009 to 2016, since, according to the petition, “the practice of paying” the sitting first lady and wife of the Vice-president, “started after the 4th Parliament of the 4th Republic”.

The latest petition by the three individuals comes at the period there is unending backlash and debate over recommendations by the Ntiamoa-Baidu Presidential Emolument Committee that led to the approval of cabinet-level salaries to presidential spouses- Rebecca Akufo-Addo, Samira Bawumia from 2017.

The Rebecca Akufo-Addo has since refunded the already paid salaries, emoluments to the state with Samira promising do same after the public mounted intense pressure on the First and Second ladies.

President John Mahama and the main opposition National Democratic Congress (NDC) have criticized the development and insists it is an unlawful agenda to sneak Rebecca Akufo-Addo and Samira Bawumia into Article 71 office holders.

The development has led to an action by the latest petitioners who are urging CHRAJ press on presidential spouses-0Ernestina Naadu Mills, Lordina Mahama and Matilda Amissah-Arthur whose husbands ruled Ghana within 2009 and 2016, must also refund their allowances accordingly.

According to the petitioners, since Ernestina Naadu Mills and Matilda Amissah-Arthur are widowed, the two are “safely covered by the humanitarian principle” instituted, proceeded by successive governments except Mrs. Lordina Mahama whose husband is still alive.

The petitioners noted that “The only odd one out is Mrs Lordina Mahama, who served through the 8 years of the Mills-Mahama-Amissa-Arthur administration from 2009 to 2016”.

Also, “We contend that there is no legal basis for including them and any related activity of theirs in the budget of the Office of the President,” the petitioners said.

The petitioners are asking CHRAJ to:

(1) Investigate the legal propriety of the payment of allowances to wives of incumbent Presidents and Vice Presidents, and demand a refund if found inappropriate.

(2) Investigate a possible case of conflict of interest in the determination of the amount paid as allowances to incumbent First and Second Ladies at the time of payment;

(3) A disclosure of the entire amount paid to all sitting First and Second Ladies (on individual basis) from 2009 to 2021.

(4) Make consequential orders and recommendations for the consideration of the State.