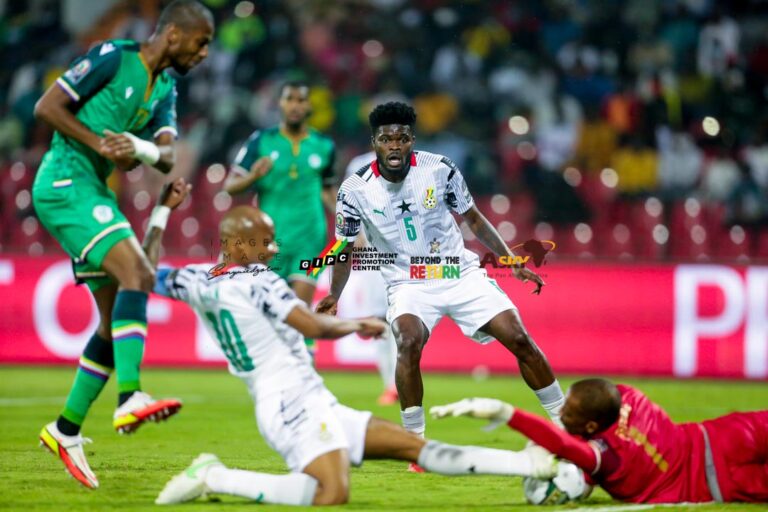 Ghana’s dream to end the forty years trophy drought remains a dream after embarrassingly exiting the 33rd edition of the African Cup of Nations in Cameroon without a single win, a situation many football watchers referred to as the most humiliating and poor showing of Black Stars in 16 years.

Despite the Ghanaians least expectations, the players were very confident of bringing the trophy home.

AFCON2021: GHANA vs COMOROSThe captain of the side Andre Ayew assured Ghanaians and the president of Ghana that they will win the trophy.

Ghana was in a group with Morocco, Gabon, and Comoros. The only team Ghana thought they could trouble them was Morocco.

Well, as predicted, Morocco defeated Ghana by a lone in a game Ghana thought they had secured a point.

The scoreline did not surprise many Ghanaians because they expected it.
The second match against Gabon was supposed to be a done deal.

Surprisingly, Gabon started with high intensity, but it was the Black Stars that opened the scoring through a sumptuous let footed shot from the skipper Andre Ayew.

Ghana had chances to bury the game, but they couldn’t make good use of them.

It was the dead embers of the game that Gabon broke the heart of Ghanaians by scoring from nothing.

Apparently, Ghanaians kicked the ball out of play because they had a man down. So Gabon should have thrown the ball back to Ghanaian players as fairplay demands.

Gabon needed a goal desperately and never considered the Fairplay, and took advantage and got the equalizer.

A scuffle ensued among both teams after the final whistle, which led a Ghanaian player seeing red after punching a Gabonese player.

The last match was against minow Comoros, who had lost all two matches and had nothing to lose. Ghana needed a win to boost their chances of qualifying to the next stage.

Shockingly, Comoros took the led in the 4th minute to make it difficult for the Ghanaians.

To add salt to the injury, Ghana’s captain Andre Ayew was shown a straight red card over a clash with Comoros goalkeeper.

In the second half, Comoros increase the tally to two but the Ghanaians responded well by bringing hope.

They scored two important goals to draw level with a hope of getting a last-minute goal to secure qualification.

Shockingly, it was the Comoros who had the last laugh with a last minute goal to completely shattered Ghana’s dreams.