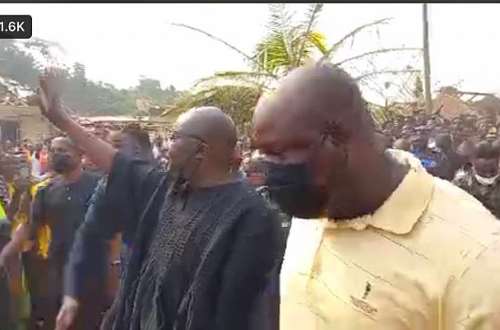 Speaking during the visit to the Apiate Community led by government delegation on Friday 21 January 2022, Vice President Dr. Bawumia said “First of on behalf the President we want to express our condolences to the victim of the explosion. Government will do everything to assist the families of victims. We thank Ghana Ambulance Service for deploying 11 ambulances for the rescue mission”.

He noted “I want assure Nananom that the president has directed me that we contact State Housing Corporation to provide accommodation for the affected community. Is a sad day for all of us. We’ve directed NADMO to provide relief packages to the affected victions”.

Ghana National Fire Service has confirmed a total of 13 deaths, 179 casualties and 45 referrals have been recorded.

Meanwhile, Information Minister of Information Kojo Oppong Nkrumah in a statement said ” 11:00am tomorrow, the emergency response team will provide updates from the scene of the incident “.

Below is the full statement issued by Information Minister Kojo Oppong Nkrumah on the Apiate Explosion:

Earlier today, Government received the tragic news of an explosion at Appiatse, along the BogosoBawdie road in the Western Region, that led to the destruction of some parts of the town, and
resulted in injuries and the death of some residents.

Preliminary reports indicate that there was an accident involving a truck conveying explosive material for a mining company, a motorcycle, and a third vehicle close to an electricity transformer,
leading to the explosion.
Upon the instructions of the President of the Republic, a National Emergency Response Mechanism
was activated immediately. Personnel from the Police Service, Fire Service, National Disaster Management Organisation (NADMO), Ghana Health Service, National Ambulance Service, the Municipal Authority, and residents have all been involved in providing support.

Additional personnel and resources have been dispatched to the community to support the response
effort. An alternative route has been created to facilitate the movement of stranded vehicles plying that
route. All hospitals within the vicinity are being used to treat injured persons, and an evacuation plan has
been activated to move those in critical condition to medical facilities in Accra so they can get the needed assistance.
To forestall a secondary explosion, a joint team of police and military explosion experts has been deployed to examine the situation and put in place the requisite measures.
As at 17:00 hours, a total of seventeen (17) people have, sadly, been confirmed dead, and fifty-nine
(59) injured persons had been rescued, bringing to seventy-six (76) the number of persons known, so far, to have been affected by the tragedy.

Out of the fifty-nine (59) injured persons, forty-two (42) are receiving treatment and some in critical condition.

Early reports indicate that several houses and structures in sections of the town have been destroyed and plans have been put in place to ensure that stranded community members are catered for in the
coming days.

Government commends the Police Service, Fire Service, National Disaster Management
Organisation (NADMO), Ghana Health Service, National Ambulance Service, the Municipal
Authority, health professionals in the medical facilities within the vicinity, and local residents for
their assistance so far.
Government further expresses deep condolences to the families of the deceased and sends best
wishes to the injured for their speedy recovery.

As relief and containment efforts continue, and the situation is brought under considerable control,
President Akufo-Addo will visit Appiatse to assess the effectiveness of the response effort.
END.

In this article:59 injured,Apiate Explosion: 13 dead,Bawumia,IGP tours community after blast