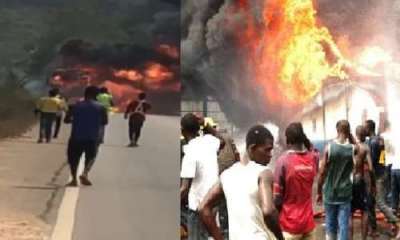 Western Regional Inspector of Mines has in accordance with an order from the CEO of Minerals Commission closed down operations of Maxam Company Limited on Saturday, January 22, 2022 upon orders from Minister for Lands and Natural Resources Samuel Abu Jinapor.

Western Regional Manager of the Minerals Commission, Isaac Mwimbelle disclosed this during the closure of the company that it has become necessary for his outfit to take drastic measure to forestall future happenings.

He said the shutdown of the entity is to pave way for further investigations and mentioned that a final report will be forwarded to the Head Office of the Commission in Accra for onward submission to the sector Minister.

He added that the Minerals Commission has issued a prohibition notice to the company, barring them from undertaking any form of activity at the site.

“Based on the initial investigations that we are conducting, we find it prudent to evoke the law which states that if the inspector has any reason to believe some operation can result in further danger, then we should caused a cessation of same.

“We went to Maxam and asked them to stop work whiles we continue the investigations and make necessary recommendations to the CEO for onward submission to the Minister.

“We issued what we called prohibition notice which means they are not allowed to hold any activity on the site and they are to remove equipment from the site for their own safety”.

To ensure that the directive is enforced, Mr. Mwimbelle stated that the Commission has deployed two members of staff to stay at the site.