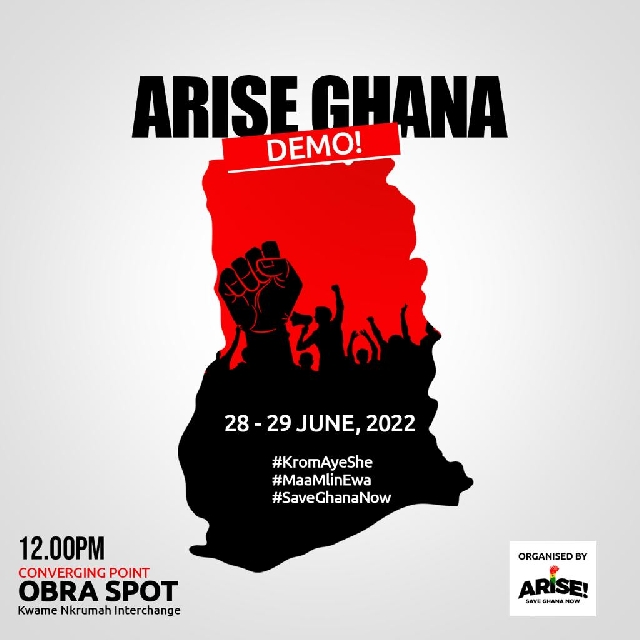 The leadership of ARISE-GHANA has finalized its official engagements with the Ghana Police Service over our impending demonstration.

Pursuant to fruitful deliberations with the Police, the following details and modalities have been agreed on for the demonstration.

2. The first day, 28th June, 2022 of the demonstration will begin at the Kwame Nkrumah Circle Interchange/ Obra Spot where we shall converge between the hours of 12PM and 3PM. We shall move through the Nima Police Station street to the Arko-Agyei inter-change and end at the Frontage of the Jubilee House where we will picket until 10PM.

The purpose of this Arise Ghana demonstration is to:

I) protest against persistent and astronomical hikes in fuel prices by the Akufo-Addo/Bawumia government that has imposed excruciating economic hardships on Ghanaians.

II) protest against the imposition of the obnoxious E-Levy on the already-burdened Ghanaian people by the insensitive Akufo-Addo/Bawumia government.

IV) protest against the grabbing of State lands by officials of the Akufo-Addo/Bawumia government, particularly the de-classification of huge portions of the Achimota Forest reserve.

V) protest against the increased rate of police brutalities and state-sponsored killing of innocent Ghanaians, as well as the growing culture of human rights abuses under the watch of President Akufo-Addo and Alhaji Bawumia.

There is no gainsaying the fact that our beloved country is in deep crises and urgently requires a rescue. We therefore wish to call on all progressive forces and patriotic Ghanaians to come out in their numbers for this historic demonstration which will mark the beginning of a new paradigm in the destiny of this country. Let us ARISE and SAVE GHANA NOW!.