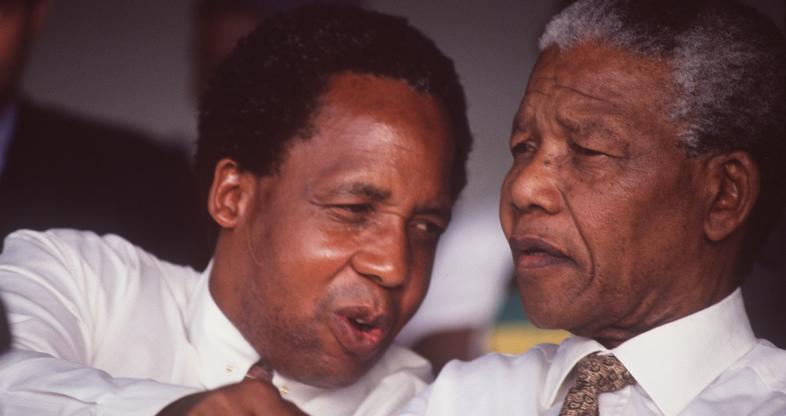 Bulawayo-The first time I entered my primary school, 1988 at the assembly point after singing the national anthem, it was a mandatory to sing a song called Azania sympathising with our fellow continent men in Azania. As young as I was in my rural area of Mhondoro from Denhere village under Chief Murambwa because of that song I started to know how evil the apartheid system was to us blacks. The day Mandela came out from prison I remember how the whole school celebrated and that morning we were told to go back home as it was a day of victory for Africa. Most of the ANC leadership cadres were living in Zambia, Mozambique, Angola, Zimbabwe and Tanzania fighting the apartheid.

The motto of the OAU was that no African country was free until all countries were free. The borders were introduced by colonial masters. OAU had big hand for Azania to be fully liberated. The OAU did play a pivotal role in eradicating colonialism and white minority rule in Africa. It gave weapons, training and military bases to liberation groups fighting white minority and colonial rule. The major achievement of the OAU was the decolonization of Africa.

Countries such as Zambia, Tanzania and the Soviet Union provided military support for the ANC and PAC. It was more difficult, though, for neighbouring states such as Botswana, Lesotho and Swaziland, because they were economically dependent on South Africa. Still, they did feed the struggle underground.

The apartheid system in South Africa was ended through a series of negotiations between 1990 and 1993 and through unilateral steps by the de Klerk government. These negotiations took place between the governing National Party, the African National Congress, a wide variety of other political organisations and under the watchtower of the OAU.

Today it is painful to see what is happening in South Africa to fellow black people. Many Africans have been killed in South Africa. Politicians in South Africa unless you have forgotten you were ones settlers/ refugees in neighbouring countries running away from the heat wave of the apartheid back home. You are now using gimmicks of staying in power pointing foreigners as the problem Azania is facing. Almost 90 percent of the illegal African immigrants are cheap labour you are enjoying but you chose to sacrifice them for your political greediness. The politicians in South Africa have blinded local people with their political statements to make them believe that fellow Africans are the ones orchestrating all the problems of unemployment.

The SA politicians/ leadership should be ashamed. You have failed the vision which was started by Kwame Nkrumah, Nyerere, Jomo Kenyatta, Oliver Tambo etc, to see a united Africa. Azania you are not an Island but a fish in a pond called Africa. Azania you need the oxygen and other fishes in the same pond you dwelling with (Africa). The great icon of Africa the late president of SA Nelson Mandela preached of Ubuntu. He never used other Africans as scapegoat of his failures. Who is behind the SA economy meltdown? The SA economical downfall is pin pointing to politicians and few cartels who are milking the purse of the rainbow nation. They are awarding each other tenders without going through proper tender process.

The politicians and their cartels accept you contributed to all the problems Azania is facing. Stop blaming poor black immigrant whom your country is using as cheap labour. Who is behind for foreigners to be killed? As much we have bad Zimbabweans, Nigerians etc. same to SA. Let the law take its justice. I condemn drug traffickers, armed robbers and murderers who kill innocent souls. Politicians don’t use the xenophobia as a tool of campaigning to win the hearts of local people while you are the big culprit.

The apartheid regime enjoyed when black people used to kill each other with guns. They allowed blacks to own guns because they knew how reckless they are when drunk. It was a way they knew we were going to eliminate each other. Azania politicians failed to address issue of guns, drug and human trafficking. Majority of the politicians are still worshiping the colonial masters. They came from the bush with zero deposit in their bank account but today majority of them are millionaires and billionares in USA dollars. Where did you get that money except occupying public offices?

I blame former President Thabo Mbeki and other politicians in SA they never played a brother’s keeper role to solve Zimbabwe economic and political crisis during 2009 GNU political dialogue but they chose to favour former President Mugabe. If Mbeki had helped to implement economic and political reforms, we were not going to witness the influx of Zimbabweans into South Africa searching for greener pastures.

South Africa is your turn to assist other countries in Africa to implement reforms which will create conducive environment for business and good ground for politics. Failure to champion reforms in Africa you will witness influx of immigrants into the rainbow nation of Africa.

During the apartheid regime fellow continent men were not sleeping thinking on how they could set free Azania. You are now free you see a fellow African as an enemy. Europe is a good testimony of a continent where member state stand for each other not being greedy but for survival as they are in the same pond. Africa, the colonial masters killed our Ubuntu and it’s why in SA some fellow blacks see a fellow African as an enemy/ treating them as not humans.

What goes around comes around? Africa lets stand up and say no to Xenophobia. We can’t watch our fellow brothers and sisters being slaughtered like flies. AU, SADC and ECOWAS and its member states never said anything about Xenophobic attacks in SA which happened in 2015 and now foreign truck drivers are being killed. If Leaders in Africa keep quite what do you expect the treatment Africa will get from other continents. if you don’t value your own people how do expect to get dignity from other continents. Stop worshiping your presidential thrones and protecting each other. South Africa need to answer why it allowed xenophobic attacks on fellow Africans happening. Unless you have forgotten people like Samora Machel sacrificed his life for Azania and Africa. Nobody ever chose to be African but it was ordained by God. Let God take His chair as Maker so no one deserves to be killed by a fellow human being.

You witness grown up people thinking like animals stoning a human being to death because is a foreigner seeing it as a solution to their problems and the leadership keeps quite. Shame on you! The King Shaka killed more than 5000 women when his mother Senzangakhona died as a way to appease her but was dethroned and killed by his young brother Dingane because it was now extreme slaughtering human beings (mothers) as if he was killing some house flies. If you kill by sword you shall die by sword. You will never evade that day no matter how rich/ powerful you are.

What does it solve killing innocent souls because you want to avenge your grievances of unemployment? The blood of those innocent souls shall avenge against all the perpetrators. You can’t kill the spirit, the spirit we will not die. Iam not really comfortable my fellow continent-men the way we treat each other in South Africa.

Africa Heads of State please fight poverty, diseases, develop your citizens, utilize wisely the God given resources to beautify your countries, protect your citizens and upgrade the standard of living.

People of Azania you need to share land equally, the white minority are owning over 80% of land. Azania needs a holistically approach on land reform policy. We are all human beings whether white/ black so I believe land should be shared equally but those who are utilising the land for betterment of Azania such farms should not be touched. Those with many farms should share and not to be greedy. The government should create policies which will champion and protect its people to be innovative and create more businesses and avoid cheap politics which will cause xenophobia. Whether black/white we are one people. Let Unity Prevail.