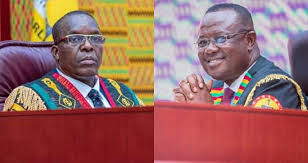 ‘Blame Joseph Osei Owusu for chaos in parliament not me’- Bagbin

Speaker of Parliament Rt. Hon. Alban Kingsford Sumana Bagbin is making a strong case that any attempt by the Majority Caucus of Parliament to blame him for the brawl in the chamber last month is dead on arrival.

In an interview with state broadcaster GBC, Bagbin said the First Deputy Speaker Joseph Osei Owusu, should be held liable for the chaotic scenes that erupted in parliament, adding that the Bekwai MP’s illegal decision to vote during the consideration of the e-levy triggered the fight.

According to him, the Bekwai MP erred in attempting to vote whilst presiding over proceedings.

“To be frank with you, my First Deputy Speaker was wrong in even announcing that he was going to vote, and so when the Second Deputy Speaker voted, he then called on him to come and take over so that he’d also go and vote…that’s what led to the fisticuffs,” Mr Bagbin said.

“Now what happened on the floor, I am being said to be the cause of it; so, where are we now? This blame game would not wash; it would not. It was a low blow to me,” the former Nadowli-Kaleo MP stressed.

He also stated that consensus-building in Parliament will suffer if the Majority Caucus continues to attack his personality.

The Speaker cited the attacks on him by the Deputy Majority Leader, Alexander Afenyo Markin and some other New Patriotic Party (NPP) MPs.

“In fact, one of them said I should learn how to lead. It’s because of the level of leadership I am at, he [Afenyo Markin] doesn’t understand it.

“You come and personally attack me, then you come to the House and you expect that we should have that spirit of consensus building; things don’t work that way,” he said.

Parliament is expected to resume January 18, 2022.

In this article:Bagbin,Blame Joseph Osei Owusu,for chaos in parliament not me’