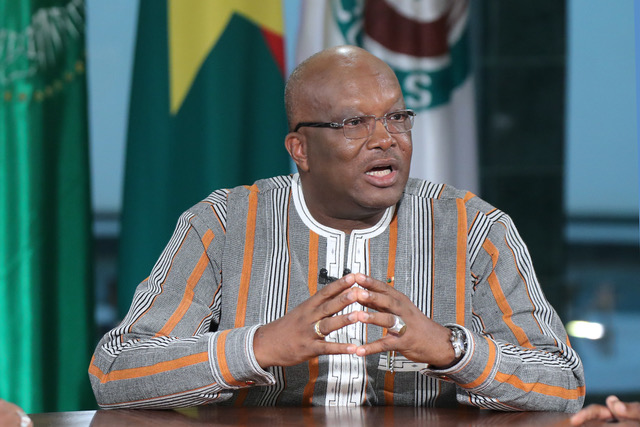 President of Burkina Faso Roch Marc Christian Kaboré was arrested on Monday and detained in a barracks in Ouagadougou, a day after mutinies in military camps in this country was plagued by jihadist violence.

“President Kaboré, the Head of Parliament (Alassane Bala Sakandé) and ministers are effectively in the hands of soldiers” at the Sangoulé Lamizana barracks in Ouagadougou, a security source confirmed.

President Kaboré, in power since 2015 and re-elected five years later on the promise to make the anti-jihadist struggle his priority, had become increasingly challenged by a population fed up with jihadist violence and his powerlessness to deal with it.

African Editors’ sources have confirmed that dozen hooded and armed soldiers were stationed Monday morning in front of the headquarters of Radio Television of Burkina (RTB), which was broadcasting entertainment programs.

Soldiers mutinied on Sunday in several barracks in Burkina Faso to demand the departure of the army chiefs and “appropriate means” to fight against jihadists who have struck the country since 2015.

Shots were heard late in the day near the residence of the head of state and a helicopter flew over the area with all lights off, according to residents.

The mutinies occurred in a West Africa increasingly destabilized by jihadists who are also striking neighboring Mali and Niger and where recent coups have occurred in Mali and Guinea.

Several angry demonstrations have taken place over the past several months in several cities in Burkina Faso to denounce the inability of the authorities to counter the increasing number of jihadist attacks, which are often banned and dispersed by riot police.

Throughout the day on Sunday, demonstrators supported the mutineers and set up makeshift roadblocks in several avenues of the capital, before being dispersed by the police.

Gunfire was heard for several hours Sunday in several barracks in Burkina Faso, including those of Sangoulé Lamizana, Baba Sy and the air base in Ouagadougou.

Mutinies also took place in Kaya and Ouahigouya, in the north of Burkina Faso where most of the jihadist attacks are concentrated, according to residents and military sources.

The government acknowledged that gunfire had been fired in several barracks, but denied that “the army had taken over.

On Sunday evening, President Kaboré decreed a curfew “until further notice” from 8 p.m. to 5:30 a.m. (local and GMT) and the government announced the closure of schools on Monday and Tuesday.

“We want resources adapted to the fight” against jihadists “and consequent manpower”, as well as the “replacement” of the highest ranking officers of the national army, said in an audio recording that a soldier from the Sangoulé Lamizana barracks, under cover of anonymity.