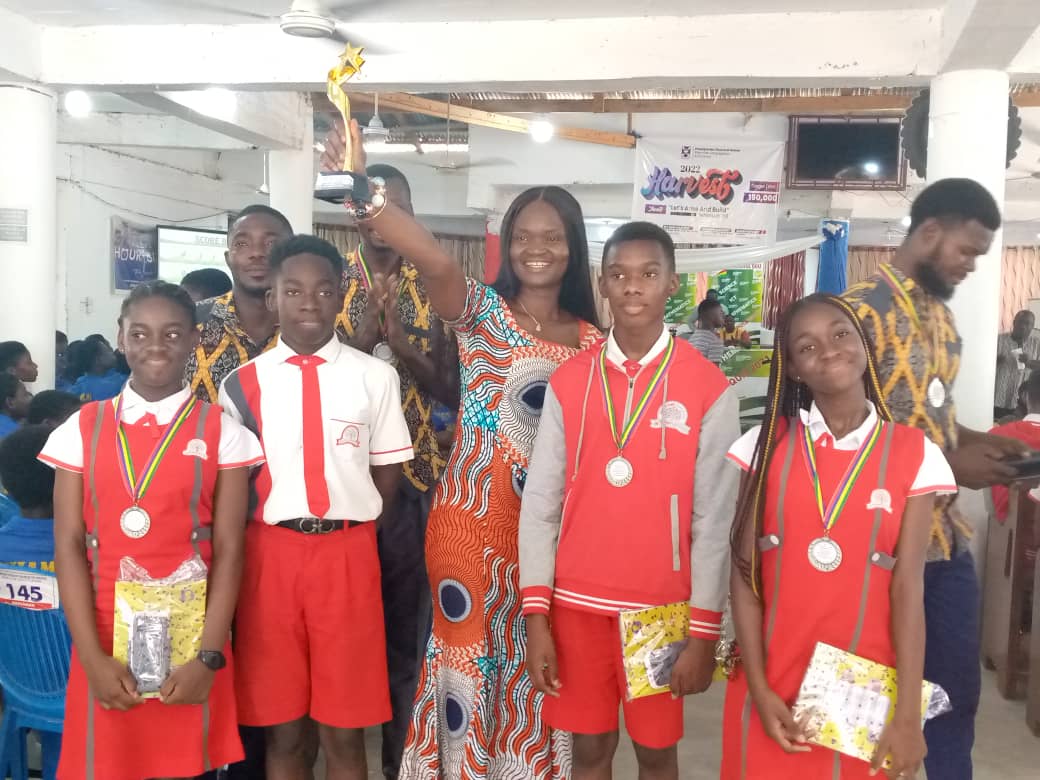 Chief Executive Officer of Cherryfield Montessori School (CMS) Madam Magdalene Dzifa Adzanu has called on Education Minister and the book runnners of Ghana Education Service (GES) to immedialety institute and scale up investments in National Science and Maths Quiz Competition for students at Junior High School level. According to her, the study of Science and Maths at JHS level remains the bedrock of Ghana’s education, capable of enhancing the problem-solving skills of students.

On her part, Cherryfield Montessori School Contestant Lawrencia Amankwaa says she looks forward to taking up careers in the medical field.

Chief Executive of Cherryfield Montessori School, the reining Champions of both 2021 and 2022 GA West Municipal BSTEM Quiz Competition Madam Magdalene Dzifa Adzanu has called on the government to invest heavily in Science, Mathematics and ICT at the Junior High School level in order for students to be versatile at the foundation stage before entering Senior High School.

According to her, the investments made at the Junior High level and knowledge acquisition would enable the students to be adequately well-informed on Science, Maths, Engineering and ICT to fully participate and Excel the crucial National Science and Maths Quiz competition without fear or favour.

Speaking to journalists after 2022 GA West Municipal BSTEM Quiz Competition organized by STEM unit of GA West Municipal Education Directorate in Amasaman, the CEO Magdalene Dzifa Adzanu maintained that through hard work, supervision and using the right academic materials for the competition gave them the necessary opportunity and advantage to topple their opponents to win the trophy for the second time.

She noted that, though sustainability is key, management rather prefer to improve on teaching and learning abilities of students that can ensure quality than to sustain the position which adversely affects progress.

“So we are going to continue to use our state-of-the-art facilities to improve on the teaching and learning to have more practical work to beef up the school’s laboratory and to invite resource personnel to offer in-service training for all the teachers to equip them in other to allow the schools to win, bring victory or be in the competition at all time”, she noted.

Madam Magdalene Dzifa Adzanu again pointed out that the BSTEM education remains very important because it develops the minds and brains of students and also help in solving problems rather than creating problems which will have an positive effects on their lives in the near future.

She therefore advised other CEOs in various schools as well as teachers to motivate and encourage their students to make Science, Maths and ICT their priority subjects as it develops their minds and enhance the mental faculties that leads to national development.

She urged the Education Minister, Dr. Yaw Adutwum to take a second look at the Junior Quiz STEM Competition that takes place every year in the municipality and give it a recognition because that will make the students to be well-informed on such subjects before advancing to the Senior High School level.

“The students must be given the opportunity to make Science, Maths and ICT their priority subjects from the foundation stage to help them become potential candidates for the same quiz competition at the Senior High”, she added.

Contributing to the debate, GA West Municipal GES Pre-tertiary Coordinator Ophelia Matanawui was optimistic that the quiz competition will receive recognition nation-wide when it received the needed government attention and support.

She therefore encouraged Parents, Guardians and teachers to include the programme at the circuit level or in the community to create the necessary awareness that will enable students to be interested in the subjects like Science, Maths and participate in the competition as well.

“Some Parents normally participate in the competition which set as an encouragement for their wards to improve their learning skills and abilities before, during and after the competition. GES in the municipality is working to make the competition more relevant, accessible and important for every student at the pre-tertiary level to participate at any given time”, she noted.

She argued that, since the Basic Strategic Plan under the Sustainable Development Goals (SDGs) empowers students at the Basic level to be knowledgeable in Science, Maths and Technology, the Education Directorate in the municipality has taken the initiative to help or support students focus more on those subjects before advancing to Senior High.

Cherryfield Montessori School Contestant Lawrencia Amankwaa was very optimistic of winning the competition based on hard work, determination and effort the team exhibited before and during the competition which enable them to successfully hold grounds against opponents.

The student, who is aspiring is to become a Medical Doctor debunked claims of winning the competition through a competitive advantage over their opponents but rather through hard work, sleepless nights and determination from both team and teachers.

“It’s not because we are from International School and our opponents are from government schools, I think if you work hard and determined, you can achieve your aim”, she noted.

The overall winner of the competition, Cherryfield Montessori School took the lead from the first round and maintained that position throughout and closed the competition with 70 points at the end to be clowned the Best in Science, Maths and ICT for the second time in the municipality.