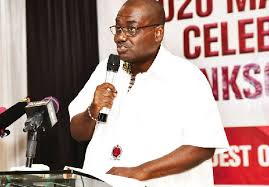 Civil and Local Government Association of Ghana (CLOGSAG) has marked its Annual Christmas season with a thanksgiving ceremony and a message urging its members to be steadfast, tolerant, law abiding and neutral in line of their duty as the association fights for their freedom.

The thanksgiving ceremony was attended by both heads of Civil and Local Government, staff of various institutions, members of CLOGSAG among others in Accra.

In a welcome address, the Vice President of CLOGSAG, Rhodaline Mensah Amoako, who spoke on behalf of the President expressed her appreciation to the almighty God for his divine interventions and making it possible to see the end of the year.

She again thanked members and staff of CLOGSAG for the hard work, good motives and sincerity towards their work to achieve the aims and objectives of the association and government businesses even in the midst of the COVID-19 pandemic.

Both Heads of Civil and Local Government, Dr. Ato Arthur and Nana Kwasi Agyekum-Dwamena expressed their delight to the entire staff and members of CLOGSAG for their dedication, commitment, seriousness and hardworking behavior towards work even though the COVID-19 pandemic has placed Ghanaians lives in danger.

“ Even in this hard times coupled with the present of the pandemic, public servants did not abandoned their work but always come to work on time to make sure government objectives and businesses are achieved for the benefit of the country”, Dr. Arthur said.

Dr. Arthur further further urged staff and members of CLOGSAG not to relent to the commitment and pledged his support to ensure leadership work together to attain the peace and successes of the association that would lead to a peaceful environment to work as well as inure to the benefit of every staff.

Also, the Head of Local Government, Nana Kwasi Agyekum-Dwamena acknowledged the importance of the thanksgiving and advised the staff and members to be grateful to God for making it possible to allow them see yet another year ending, adding that, I almost died when I was diagnose of COVID-19 but through the grace of God I came back to life again.

The Executive Secretary of CLOGSAG, Isaac Bampoe Addo also touched on situations that CLOGSAG is saddled with such as equality and freedom from discrimination.

He cited Article 17(2) and (3) of the 1992 constitution which states that All persons shall not be discriminated against on grounds of gender, race, colour, ethnic, origin, religion, creed or economic states.

“The association finds the blatant disregard to sanction political appointees who interferes in the day to day activities of the civil service and the local government service highly appalling. Why should public servants who show overtly of their political orientation be made to resign or their appointments terminated whiles interferences from political appointees in the affairs if the service do not receive any sanction?”, he quizzed.

Mr. Bampoe Addo therefore appealed to the government to demonstrate impartiality in dealing with issues affecting the delivery service within both the Local Government and Civil Services with regards to neutrality and political interference.

“Indeed, political interference is an example of abuse of power that should not be penalized”, he noted.

He charged government to take steps to eradicate abuse of power and promote political tolerance within the public service as he again cited Article 34(8) and (9) of the 1992 constitution which states that (a) the state shall take steps to eradicate corruption practices and abuse of power and (b) the state shall promote among the people of Ghana the culture of political tolerance.

The Executive Secretary of CLOGSAG called on government to adopted the practice of fairness and equity in the governance system and also direct his appointees to desist from intolerance and discrimination among public servants because the aberrations of such practices is negatively affecting effective service delivery and rather give way to the appropriate institutions to perform their legitimate functions.

“The “ I cannot work with you syndrome, I am the Minister and therefore have the power to post and transfer officers should be avoided”. Again, urgent steps should be taken to bring about tolerance in dealing with such situations”, he noted.