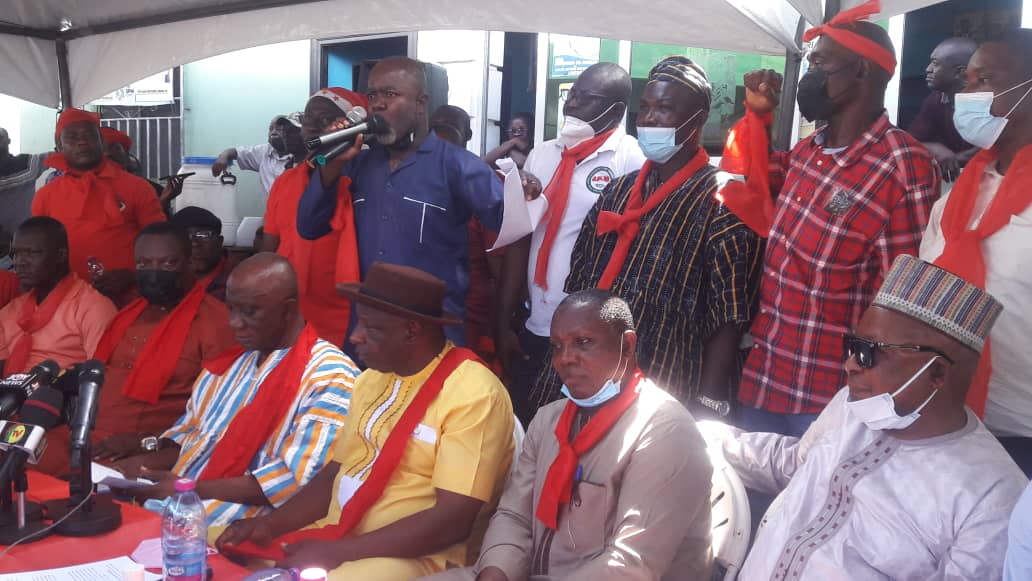 Coalition of Commercial Transport Operators across the country have threatened to embark on a strike action on Thursday late afternoon to express their displeasure over the continuous fuel price hike and government’s failure to scrap the taxes and levies.

According to the angry members, failure in the side of government to consider their grievances and remove the taxes and levies they term as “Nuisance” they would take further action which would not be pleasant to the ordinary Ghanaian and passengers though there’s no intention to adjust transport fares upward.

At a press conference organized by the Coalition and addressed by the General Secretary of GPRTU, Godfred Abulbire called on government to consider and address their grievances by scrapping the taxes and levies on petroleum products in order to reduce the fuel price hike at the pump.

Mr. Abulbire said the introduction of some taxes and levies on petroleum products has caused the drastic hike in fuel prices and other petroleum products making it unbearable for them to work in an enjoyable environment and conditions.

“Our workers in the commercial industry are suffering due to the consistent hikes in fuel and therefore if care is not taken most of the driver’s and operators would quit and industry would collapse as well”, he added.

The Coalition have refused to increase transport fares due to present hardship and suffering situation Ghanaians are going through which the transport operators sees it as over-burdening even though the consistent price hike on fuel demands an upward adjustment on lorry fares.

“We came into conclusion that there would be no upward adjustments in lorry fares since it will cause a lot of suffering to the ordinary Ghanaian and passengers who patronize the commercial transport and so, that’s why we calling on the government to scrap the taxes totally to reduce the hike on fuel as well”, the Gen. Sec. of GPRTU stated.

He therefore called on the President, Finance and Transport Ministers to pay heed to their concerns and address them by scrapping the taxes and levies to reduce fuel price and as well reduce the burden on driver’s and transport operator’s in the country.

The Executive Chairman of COPEC, Duncan Amoah also urged the coalition not to desist from their demand but rather form a strong united front to ensure government heed to their demand and scrap the taxes and levies on petroleum products.

He said “COPEC is backing the call on government to ensure the removal of some levies and taxes that is causing the drastic hike on the fuel as well as the strike action, if the government has a listening ears, then their grievances must be addressed to bring comfortability and reduce the suffering on consumers”, he said.

Also, a member of JAPTU, Ibrahim Musah appealed to the government to reconsider its decision and scrap the taxes and levies on the petroleum products because it’s causing the rising cost of fuel at the pump.

“We no more comfortable with our work and the business is not viable as well because we use the margins which is our profits to purchase fuel just to save the state and government which we also expect a reciprocal from government but it’s not happening that way”, Mr. Musah said.

He further pinpointed the number of occasions that the transport operators have signalled government to scrap the taxes and levies on petroleum products in order to reduce the fuel price hike but all proved futile, adding, “therefore we have no option than to embark on strike to prove our discomfort and displeasure we going through.”

“If we don’t take care our business would collapse and we nothing would be left for us to do, we can’t live in this suffering situation anymore and watch our business to down the drain”, he lamented.

In this article:16 driver unions,threaten strike in 48 hours