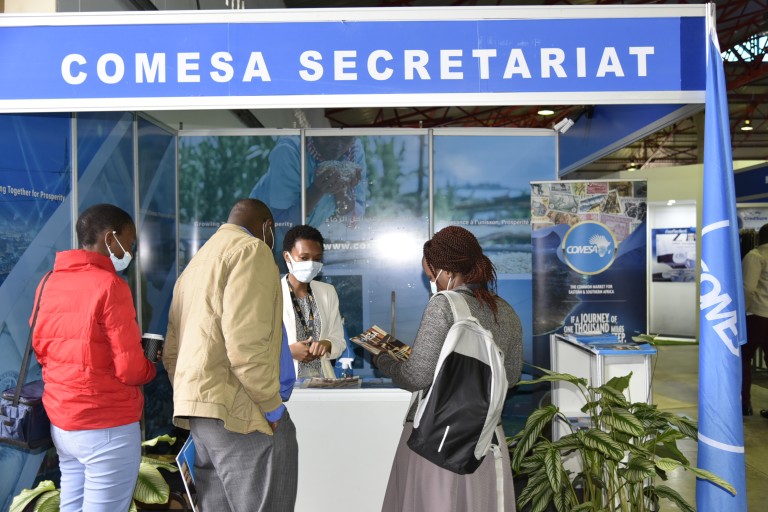 Bulawayo-COMESA Secretariat is participating at the 62nd Zimbabwe International Trade Fair (ZITF) which is being held in Bulawayo.

According to the statement shared to this publication by COMESA-There main agenda is to raise public and stakeholder awareness on regional integration programmes and encourage them to take advantage of the opportunities that COMESA provides. It is also part of the demonstration of the COMESA programmes in Member States as provided for in the COMESA Communication Strategy.

“This trade fair presents an opportunity to showcase COMESA as an organization, its programmes, its institutions, and to address any information gaps that might be existing,” said Ms Netta Gichuki, a Trade Expert at COMESA Secretariat who is in the expo team.

The theme of the ZITF resonates with COMESA’s strategy of economic prosperity through regional integration, supporting the social economic structure of the region.
To this end, the Secretariat works in partnerships for the economic development of the region based on trade and development of the agro-industry, investment promotion, physical and digital connectivity, programmes for the inclusion of women and youths and for the sustainable use of natural resources.
According to a COMESA study conducted last year titled ‘Export Potentials of Intra-COMESA Trade’ Zimbabwe has the potential to increase intra-COMESA trade by US$ 4.1 billion.

Eleven of its export products have the highest trade potential, including tar distilled from coal, fruits of the genus capsicum, avocados, glass products, and tungsten ores and concentrates.
COMESA countries that are exhibiting at the Fair include Ethiopia, Kenya, Malawi and Zambia. Non-COMESA countries present are Angola, Botswana, Namibia, Mozambique, South Africa and Tanzania among others.
Zimbabwe President His Excellency Emmerson Mnangagwa officially opened the trade fair today on the Friday 29 April 2022.

So far, several people have visited the COMESA stand housed in Hall 4 and their inquiries range from seeking information about the COMESA trade facilitation programmes, information on available markets in the region, financial support to women entrepreneurs, cross border motor vehicle insurance and general information on COMESA and its programmes.

The history of COMESA began in December 1994 when it was formed to replace the former Preferential Trade Area (PTA) which had existed from the earlier days of 1981. COMESA (as defined by its Treaty) was established ‘as an organisation of free independent sovereign states which have agreed to co-operate in developing their natural and human resources for the good of all their people’ and as such it has a wide-ranging series of objectives which necessarily include in its priorities the promotion of peace and security in the region.

However, due to COMESA’s economic history and background its main focus is on the formation of a large economic and trading unit that is capable of overcoming some of the barriers that are faced by individual states.

Enos Denhere is a freelance Journalist, blogger and Advocate for social justice. Brain child behind Rebuild Africa. He can be reached on email enosdenhere@gmail.com WhatsApp +263773894975 https://www.linkedin.com/in/enos-denhere-11293429/