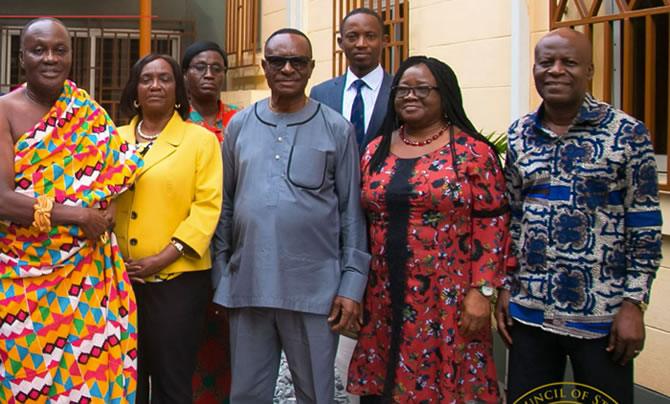 It has emerged that Ghana’s Council of State has redirected a Right to Information (RTI) request applicant to liaise with a private entity, Metropolitan Television (Metro TV) to secure the information he requested from the council.

In a response to the application for the attendance list of Council of State, the council said, the information being sought had already been given to an Accra-based, Metro TV and the applicant should go there.

“The purpose of the request is to verify a claim made by Mr. Paul Adom-Otchere [of Metro TV] that Togbe Afede XIV was paid for traveling from Ho to attend meetings for the period he served as a member o the Council of State,” the request said.

The Council of state responded to both requests in one letter dated June 13, 2022. The response said, “Please, be informed that the information requested is readily available by another public institution, Metro TV who requested the same information on June 8, 2022, and have since put it into the public domain.”

“We are by this letter requesting Metro TV to give you the necessary cooperation,” the response signed by Stephen Blay, the Director of Finance and Administration of the Council of State said.

But it appears the Council of State, which is supposed to advise the president, misread and misinterpreted the provision of the Right to Information Act 2019, (Act 989).

(a) direct the application to that public institution having custody of the official publication containing the information sought; and

(b) notify that public institution of the request by the applicant.”

RE:REQUEST FOR ATTENDANCE OF MEMBERS

Dr Elikplim Kwabla Apetorgbor said he was unhappy with the response he got from the Council of state. “I suspect a foul play because it doesn’t cost them anything to print the same information they have made available to a citizen a few days ago,” he told The Fourth Estate.

“Besides, what is the assurance that Metro or Paul [Paul Adom-Otchere of Metro TV, who made the initial request] will give me the same information they were given?” he asked.

He also said what he asked went beyond the information on attendance that Metro TV received and broadcast. Besides the attendance list, he specifically asked for allowances paid to members of the council of the state in a separate letter.

Dr. Apetorgbor said he would follow up to “demand” a response on the request he made to the council on the payment of allowances while he sought a legal opinion on the response he got for the first request.

Meanwhile, The Fourth Estate also applied to the Council of State for some 17 pieces of information on Friday, June 8, 2022.

However, the council is yet to respond to the request by The Fourth Estate at the time of filing this report (June 15, 2022) even though the council responded to Metro TV’s request in less than 24 hours.

The request borders on issues surrounding the revelation by a member of that eminent body, Togbe Afede XIV, who returned his “unconscionable” GHc365,000 ex-gratia paid to him for serving the country for four years.

According to the Paramount Chief of the Asogli State in the Volta Region, who served alongside 23 other members of the Council of State from 2017 to 2020, the payment of the ex-gratia was “unconscionable” and “inappropriate”.

“I believe it was paid to everybody who served on the Council of State. However, I thought that extra payment was inappropriate for a short, effectively part-time work, for which I received a monthly salary and was entitled to other privileges. So, I was very uncomfortable with it,” he said in a press statement.

He continued, “I want to add that my rejection of the payment was consistent with my general abhorrence of the payment of huge Ex Gratia and other outrageous benefits to people who have by their own volition offered to serve our poor country”.