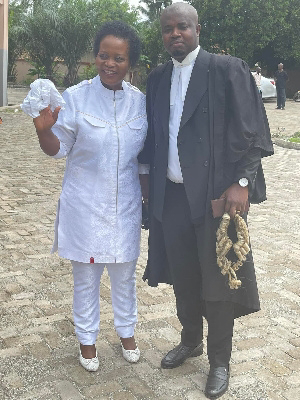 Hohoe High Court, after closed to two years, has dismissed a petition by the New Patriotic Party challenging the election of Helen Adwoa Ntoso as the Member of Parliament for Krachi West.

The NPP after the 2020 elections, filed a suit challenging the declaration of the National Democratic Congress candidate as the winner of Krachi West Constituency.

But, the Hohoe High Court presided over by His Lordship Justice Armah Aryeteey has dismissed the petition in its entirety.

“One of the NDC Parliamentary seats that was contested after the 2020 election was the Krachi West Constituency. We have been battling the election petition at the High Court in Hohoe. After almost two years of hearing. Today, High Court presided over by Justice Amarh Aryeetey dismissed the petition in its entirety. We are grateful to the High Court. Congratulations to Hon Adwoa Helen Ntoso,” Member of the NDC’s Legal Team, Edudzi Kudzo Tamakloe shared in a Facebook post.

In the aftermath of the 2020 elections, both the NDC and the NPP filed a collective of 16 legal challenges against each other.

The suits among other things bordered on alleged electoral malpractices, eligibility of candidates, and disenfranchisement of some eligible voters.

This was besides the major election petition which was filed by NDC flagbearer, John Mahama against the Electoral Commission and President Nana Akufo-Addo who was the candidate for the NPP.

Former President Mahama’s suit challenging the reelection of President Akufo-Addo would later however be dismissed by the Supreme Court for lack of merit.