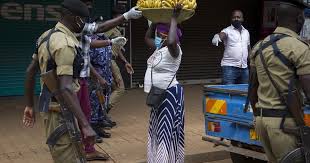 Uganda government sent the police to chase vendors selling merchandise in Kampala despite a Covid-19 stay home orders given by the President.

Last Friday, authorities in the African country declared a 42-day lockdown, following a surge in corobavirus cases. But some residents have been sneaking into the city to make a living.

Over 200 people were arrested as they went about their business activities in the city centre.

“Part of the guidelines was to make sure that hawkers and people who are selling on the roadside are not doing that business, but unfortunately we found many of them doing that and over 200 have been arrested,” said Kampala police spokesman Luke Owoyesigire.

Only pharmacies, supermarkets and other stores selling essential goods are allowed to open, according to the new measures.

Public transport is also suspended, with only cargo truckers and flights exempted from the ban.

The east African country has not announced any social protection plan for its poor and those rendered jobless by the new measures.

Police have been given orders to arrest and seize goods belonging to vendors.

Uganda’s security forces have been accused of high-handedness during the enforcement of lockdown orders. Two people are known to have been killed by police officers overseeing a ban on inter-district travel.

Activists have accused the government of botching its response to the pandemic.

Uganda borrowed nearly a billion dollars last year for Covid-19 response but an audit revealed that millions were stolen or irregularly spent.