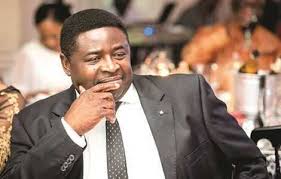 Democracy must work for all of us ‘not few’, how can ‘1prez make 5,400 appointments?- Dr. Abu Sakarah

“You and I know that the kind of democracy we are practising now has made the system so unbalanced. How is democracy working for all of us ? Our democracy must work for all of us not few. Let’s relook at the too much power of the president who makes over 5000 appointments and fund state institutions”, Former Conventions People’s Party Flagbearer (CPP) and Founder, National Interest Movement (NIM) Dr. Abu Foster Sakarah has said.

According to him, the imbalance of the executive and other organs of state will not make institutions work.

“For instance, you can’t appoint Council State Members who are supposed to be advising you in a neutral way and expect that to happen. We need a very independent Council of State”, Dr. Sakarah noted.

For him, “We’re working on a very narrow space. Let’s limit the power of the executive in a manner that it will work in the collective interest of all of us. The focus should be where Ghana will be tomorrow not today. How can the president be funding Electoral Commission of Ghana ? What about he doesn’t accept a particular decision of the EC and the opposition, will the president release funds for it ? “.

Dr. Abu Sakarah has also advocated for extension of presidential term limit from four to six years. According to him, such amendment will change from short-term focus to long term focus and approaches of doing things in the country.

“The duopoly in place where NPP and NDC are fully in charge, by four years, contracts and projects are not well executed. Then a new government comes to power and cancel existing agreement and projects leading to judgement debts”.

Contributing to the debate, Former Attorney General and Minister of Justice Lawyer Joseph Ayikoi Otoo says people must point out the aspects of the Constitution that they want changed. According to him, people should not behave as if the 1992 Constitution has never been ammended because the retirement period of workers was amended to sixty years.

“If you say the president has too much power Let’s the system and instructions work”.

But, “there is the need to relook at the issue of Article 71 office holders. The grounds of my argument is that…so if one person continues to be an MP for five time/terms, he continues to take the ex-gratia”.

This old ideas of appointing more Ministers from parliament, was Limann’s idea. We’re too quick to say the president has too much power. Note that” if everything is not working, the president is held accountable”.