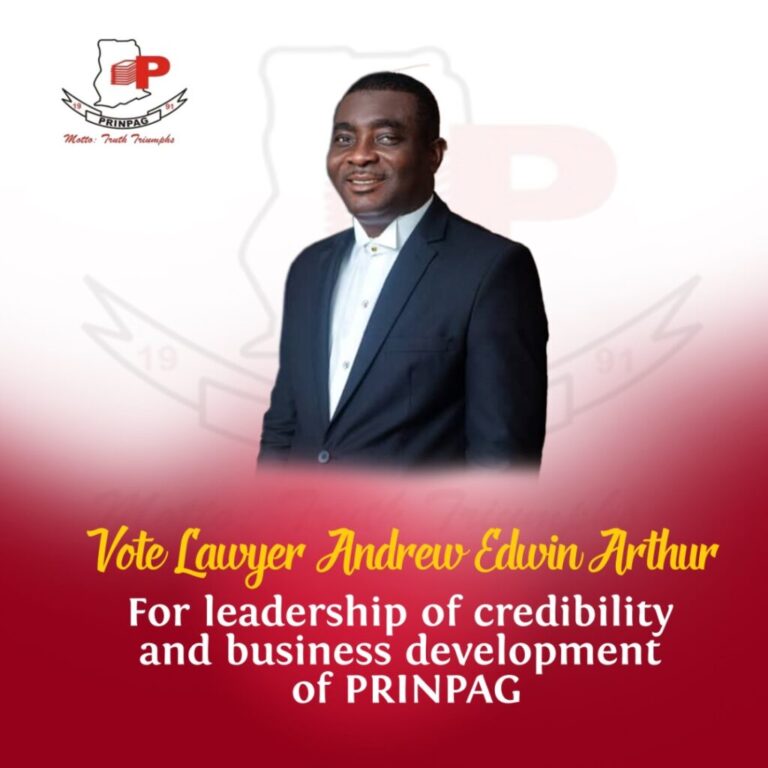 Managing Editor of New Independent Newspaper, Mr. Andrew Edwin Arthur has been re-elected as President of the Private Newspaper Publishers Association of Ghana (PRINPAG) to serve a second term.

With this outcome, Edwin Arthur, a lawyer and owner of the Independent Newspaper continues as PRINPAG President whilst David Tamakloe bows out from the executives as Vice President.

Other executive positions went unopposed and the sole candidates were duly elected by YES and NO votes.

At the close of the polls, Michael Antwi Adjei of Ghanaian Observer, Emmanuel Opare Djan and Jeorge Wilson Kingson, were elected unopposed for the office of Vice President, National Organizer and Public Relations and External Affairs respectively.

Press statement by the Executive Secretary, Kentiman Nii Sowah said the election was conducted by a three-Member Committee of the association headed by a Senior Journalist of the Catholic Standard Newspaper, Sir Ben Assorow.

The Elections Committee of the Private Newspaper Publishers Association of Ghana (PRINPAG) has declared LAWYER ANDREW EDWIN ARTHUR Publisher of the New Independent and Incumbent President as the winner of the Presidential Elections held by the Association in Accra on Friday, August 12, 2022.

He pulled 32 votes against his competitor, Mr. David Tamakloe publisher of Whatsupnewsghana.com who had 18 votes. Declaring the results, the Chairman of the Elections Committee, Mr. Ben Assorow announced that all unopposed candidates had a YES Vote of 94% with 6% NO Votes. They were Mr. Michael Antwi-Agyei who won the position of Vice-President; Mr. Emmanuel Opare-Djan who was retained unopposed as National Organiser; whilst Mr. Jeorge Wilson Kingson was elected to the newly-created position of Public Affairs Officer.

In his remarks after the polls, the Chairman of the Elections Committee Mr. Ben Assorow warmly commended the PRINPAG members for their 100% turn out which is an inspiration to the incoming Executives. He disclosed that the incoming executives shall appoint an Acting Treasurer till nomination is open for an election to elect a substantive Treasurer.

The losing Candidate, Mr. David Tamakloe assured PRINPAG members of his support and readiness to represent the Association at any level.

The President-elect, Mr. Edwin Arthur thanked all members for their enthusiasm and overwhelming support at the polls. He reiterated his commitment to the development of the Association and assured that he will continue the PRINPAG AGENDA of “Re-organization, Re-branding and Re-tooling” of the Association.

The Swearing-in of the newly-elected Executives comes on by the close of August.

The Elections Committee of the Private Newspaper Publishers Association of Ghana (PRINPAG) at its 4th Sitting at the Secretariat of PRINPAG on Thursday, August 4, 2022 undertook the vetting of Aspirants vying for positions as enshrined in the PRINPAG Constitution – ARTICLE 10.0 which states inter-alia: 10.1 the Executive Committee of the Association (“The Executives”) shall consist of the President, Vice-President, Executive Secretary, Public & External Affairs Officer, National Organiser and Financial Secretary/Treasurer.

The Executive Members shall be proposed, seconded and elected by members in good standing and shall be eligible to remain in office for a period of three (3) years renewable.

The Executive Secretary shall be appointed by the Executive Committee on a four (4) year contract subject to renewal.
Again, on the Elections and the eligibility criteria the PRINPAG Constitution states in ARTICLE 17.0 inter-alia: The Elections Committee is the highest elections body for all elections to positions in the Association.

The Executive positions can only be contested for by members in good standing and who have been members of the Association for a period of not less than three (3) years.

A member who wishes to stand for Elections must be nominated and seconded by two (2) other members in good standing.

Pursuant to the above the following members in good standing picked and filled their NOMINATION FORMS for the following positions:

CANDIDATES FOR THE POSITION OF PRESIDENT: MR. EDWIN ARTHUR, of the New Independent (incumbent President)

CANDIDATE FOR THE POSITION OF VICE-PRESIDENT:
MR. MIKE ANTWI ADJEI, of the Ghanaian Observer.

CANDIDATE FOR THE POSITION OF TREASURER:
MR. ELORM DESEWU, of the Economy Times.

At the close of the VETTING process the Committee explained to Candidates going to polls unopposed that “there shall be a YES or NO votes. Candidates are required to obtain plus fifty percent (50%) votes before they can be declared eligible winners”.

After the vetting process however, the 3-member Elections Committee by a unanimous decision disqualified MR. ELORM DESEWU who was vying for the position of Treasurer on technical grounds.