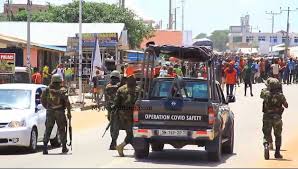 General Officer Commanding in-charge of Central Command Brigadier General Joseph Aphour has mounted a strong defence for sporadic shooting of live bullets into unarmed civilians at ejura by the military during a protest over the murder of Ibrahim Mohammed, Kaaka.

Pandemonium erupted after Ejura youth staged a protest in solidarity with the lost Kaaka referred to by his peers as Kako Macho during which two persons were shot dead by the military, forcing Interior Minster Ambrose Dery to set up a committee to probe the incidence on the orders of President Akufo-Addo.

According to Brigadier Aphour, his men in uniform were compelled to apply a minimum force to put the situation under total control when chaotic scene broke between disgruntled residents, police and military.

Taking his turn at the Justice Koomson-led Committee of Enquiry at Ejura, Brigadier General Aphour said “We decided to give verbal warnings, we fired warning shots and I must say it was becoming very bad to see civilians firing from the ground and we resorted to minimum force to calm the situation”.

For us, “to see civilians firing, it was becoming too bad, we were supposed to use maximum force but we used minimum force as some people were firing within the crowd to control and deescalate the situation as the rioting protestors remained resolute”.

Appearing before the committee, Lt. Col. Kwesi Ware Peperah says it is a “standard procedure and strategy that the military apply a force that is higher than the police to control a situation beyond the capability of the peace officers”.

But, Ejura District Police Commander DSP David Agyemang has admitted that his outfit was not adequately equipped to handle the situation at Ejura”.

The Justice Koomson-led Committee has been tasked to conduct the probe into unfortunate incidence at Ejura in consonance with terms, conditions and present a report within ten days.