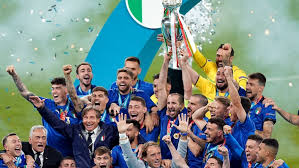 Fans of Italy on Sunday received beatings of their lives after emerging victorious at the just ended European Championship 2020/21 finals held at Wembley Sports Stadium in England.

In a televised tournament monitored by African Editors on Sunday 11 July 2021, the much talked about game saw football legends, movies actors and prominent personalities witnessing the game.

The Manchester left-back, Luke Shaw opened the game with an early goal that saw his opponent gasping for an equaliser.

Meanwhile, Italy, predominantly tipped as the favorite by many sports analysts, woke up to equalize through the strike of Leornado Bonucci, the Juventus Center-back.

The tournament which encountered both sides given orgasmic football ended with a Penalty shoot out, with the Azzuries of Italy lifting the Trophy.