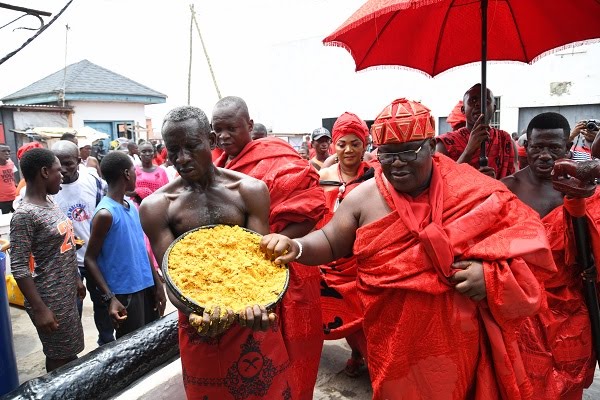 Nothing unites Gas more than their centuries old Homowo Festival which is deeply interwoven with their roots as ethnic group in migration to their present home.

There have been different accounts to where the Gas migrated from but the fact remains that after their voyage from afar, they first settled at Ayawaso under King Ayi Kushi (1510-1535), who was their first known King of recorded history. Ayawaso is about 24 kilometres from the current settlement of the Gas in the Accra Plains and the coast land in today’s Greater Accra Region.

Thus the establishment of Ga Mashie, Osu, La, Teshie, Nungua, and Tema spreading around the coastal area along the Gulf of Guinea.

However, upon their arrival, misfortune struck when their first harvest of maize farms were hit by drought. As a result of the drought, most of the maize plants wilted, creating an acute famine for the new settlers.

The famine created a lot of discomfort and even deaths in the settlements, thus, the following year, when there was a bumper harvest of maize and enough fishes from the sea, the Gas decided to hoot at hunger (meaning of Homowo). Special meal, ‘kpokpoi’ and palm nut soup mostly cooked with fish, was designated for the occasion to mark a new year for the Gas.

The people of Nungua begin the celebration, followed by Lante Dzan We Clan, then Tema, Ga Mashie, La, Osu, Teshie, Kpone, Prampram and Ningo in that order.

Tomorrow is the turn of the Ga Mashie people, and they started the festival with Shibaa by the principal priests.

After the drumming of the Odadaoo drums by the Gbese Mantse, the floodgate for the city’s normal entertainment life would be opened in that jurisdiction. Today, Ga Mashie will be agog with merry making as they celebrate the twin-festival before the Homowo, which is tomorrow.