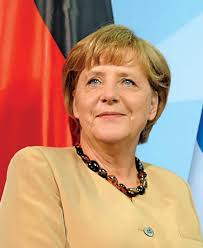 Germany’s Chancellor Angela Merkel, who is currently in the United States of America aheadof a meeting with President Joe Biden, has expressed shock at damages caused by the rampaging floods, a natural disaster.

In a televised programme monitored by African Editors on Thursday 15 July 2021 , the rainfall pattern which covers almost Western Europe has hit Belgium and the Netherlands respectively.

Chief of Rhineland- Palatinate State, in Southwestern Germany Malu Dreyer , has described the flooding as catastrophic.

” There are dead, missing and many people in danger”.

Meanwhile, the torrential rains which descended today have claimed almost 20 lives with Police indicating that they are not clear on the number of people who need to be rescued.

“We currently have an unclear number of people on roofs who need to be rescued,” a spokesperson for the Koblenz Police said.

Reports suggest about 50 people have been trapped on roofs to escape the flooding.

“There are many places where fire brigades and rescue workers have been deployed. We do not yet have a very precise picture because rescue measures are continuing,” the spokesperson said.