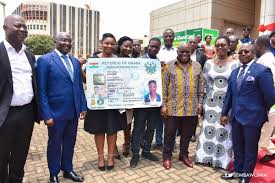 Ghana’s Minister for Foreign Affairs and Regional Integration, Shirley Ayorkor Botchwey has debunked declaration by Vice President Dr. Mahamudu Bawumia that the Ghana Card can be accepted as a travelling document in place of a passport.

Delivering a lecture at Ashesi University, Dr. Bawumia disclosed that “The Ghana Card is an e-passport and could be singled-handedly used in the absence of Ghanaian passport to travel to 197 countries and accepted in 44000 Airports in the world”.

Vice President Dr Mahamudu Bawumia also stated ” the Ghana card had been accepted by ICAO as an e-passport”.

The development which attracted sharp clarification from ICAO refuting such claims, also received a backlash from many who believed the pronouncement by Dr. Bawumia is untrue awkward, perverse with little or no basis because the world has less than 197 countries, with government’s functionaries, spokesmen struggling to defend a rather infamous declaration “.

But, taking her turns at parliament upon questions from MPs, the Foreign Affairs Minister Ayorkor Botchey insists ” even though the Ghana card has the potential of becoming an e-passport, it has not been accepted outside the ECOWAS sub-region yet.

“To conclude Mr Speaker, I wish to reiterate that even though the Ghana Card bears the technical features of an E-passport and has the potential to be used as an E-passport there is still a long way to go for it to be recognized as such,” she noted.