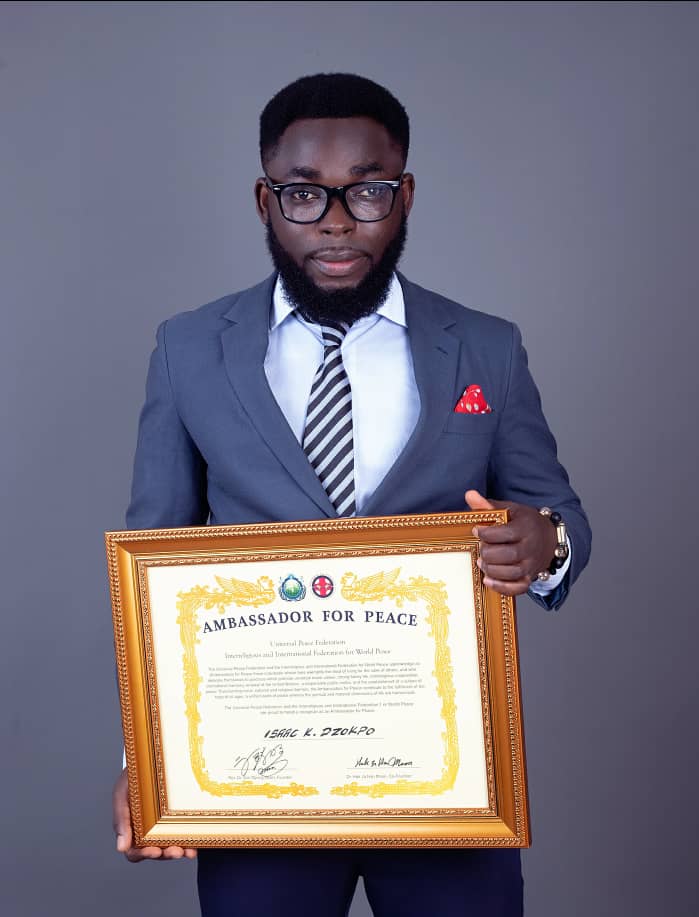 In view of this, the experienced blogger has been inducted as an executive of the International Media Association for Peace (IMAP) to champion sustainable peace projects in enhancing the existence of humanity.

The award was conferred on him in Accra-Ghana at the premises of the Family Federation for World Peace and Unification (FFWPU) Ghana.

Over the years, Mr. Dzokpo, referred to as Hon. Ike by peers has been on the forefront of helping to promote and sustain peace in Ghana.

As International Peace Ambassador, he is determined to sustain the peaceful atmosphere in Ghana that will serve as a shining example to West African sub-region

Kofi Dzokpo also doubles as the Director of Laughter Palace Production has been featured in both local and international movies such as the “Beasts of No Nation,” which had Abraham Attah as the main character, and other international actors and actresses.

Currently, he works with News Ghana and the same time the Managing Editor for Capitalnews Online.

The National Secretary-General of the Universal Peace Federation (UPF) Ghana, Dr. Helen Osei, however, underscored the need for the media to work towards sustaining peace in Ghana and globally.

Stressing that, there is the need for the media to promote the values of interdependence, mutual prosperity, and universal values.

Universal Peace Federation (UPF), an international and interreligious network of individuals and organizations, including representatives from religion, government, civil society, and the private sectors dedicated to achieving world peace.

Founded by Rev. Sun Myeun Moon in 2005, it has since assumed a special consultative status with the Economic and Social Council of the UN.