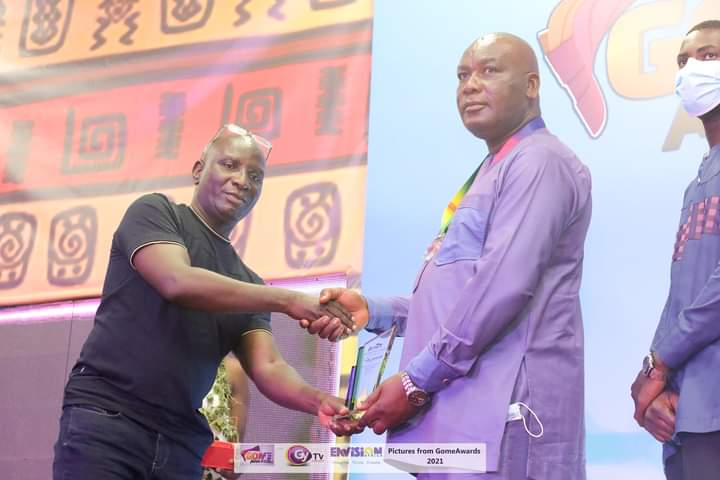 Goldstar Air (Wings of Ghana), a wholly-owned Ghanaian airline, has been recognized for the second time as Most Promising Airline Company of the
Year at the Gome Awards ‘21, which was held on Friday 25th February 2022 at the Accra Metropolitan Snap Hall in Accra.

The award scheme aims to centralize the strength and to promote, empower, recognize, and emerge great personalities, corporate bodies, and individuals working together for the development and betterment of Ghana.
The award was presented by Mr. Socrate Safo, a Ghanaian director, filmmaker,
and Director for Creative Arts at the National Commission on Culture in Ghana which was recieved on behalf of the airline by Mr. Eric Bannerman, Executive Chairman/CEO and Mr. Edmund Lamptey, Executive Assistant.
Mr. Eric Bannerman is delighted that this award is in recognition of the
successful efforts of the airline’s great work during the most difficult and challenging years of COVID-19 pandemic and a testament to the diligent execution of its strategic initiative and we are extremely excited. This award will undoubtedly spur us on to work even harder to continuously be an industry player to make Ghana an aviation hub.

According to the CEO of Crystal Galaxy College Dr. Isaac Virtues Ankomah, the
school remains a renowned professional media and aviation school that trains
individuals to meet the business industry requirement. In view of this, Crystal Galaxy College that held its 17th graduation in Accra November 2020, is committed to making higher education accessible to all who work hard and
are capable of pursuing Aviation, Journalism, Business, Oil and Gas
programmes.
In 2017, Goldstar Air received the Quality Excellence Awards for the same category held at the Golden Tulip Hotel in Accra which was hosted by Gehab
Events. The award recognized, appreciated, and brought together outstanding
professionals and organizations whose behavior was an inspiration to others,
according to Madam Judith Worlali, Managing Director of Gehab Events.

She praised Goldstar Air for establishing a reputation among its peers and for
its efforts to create jobs in a variety of fields. She stated that the decision to award Goldstar Air was made after carefully evaluating the company’s
performance, during the year in review.
In the same year, the Christian Philanthropist Forum, an international faithbased organization, presented the airline with an international award in Accra. The award was given to distinguished individuals and companies who
are positively impacting lives and communities at the Annual Lecture and
Awards night, which was themed “Imparting Society Positively through Philanthropism.”
In Ghana, Goldstar Air’s impressive strides in corporate social responsibility,
corporate vision, inspiration, and trailblazing innovations are critical components of the country’s transformation agenda toward economic growth.

Mr. Eric Bannerman, CEO of Goldstar Air, was honored with the Global
Stewardship Awards’ Most Inspiring Personality in Aviation Award in 2020.
Maame Yaa Baima of the Global Stewardship Network and a Peace FM newscaster pesented the award in recognition and sincere appreciation for his exceptional service to humanity, loyalty, and dedication. The citation goes on to say, “We carry in our hearts the uniqueness of your service, and may the almighty God strengthen, increase you in wisdom, and build you in stature” – and it also thanks him for his significant contributions
to the communities.

The wholly-owned Ghanaian airline will fly one of the world’s youngest fleets,
featuring the world’s most technologically advanced and environmentally
friendly aircrafts, and will project a fleet of more than 100 modern aircrafts to more than 90 key business and leisure destinations in Europe, the Middle East, Africa, Asia Pacific, the Caribbean, and North America.

In this article:"Most Promising Airline of The Year' at,Goldstar Air Adjudged 2021,Gome Awards"