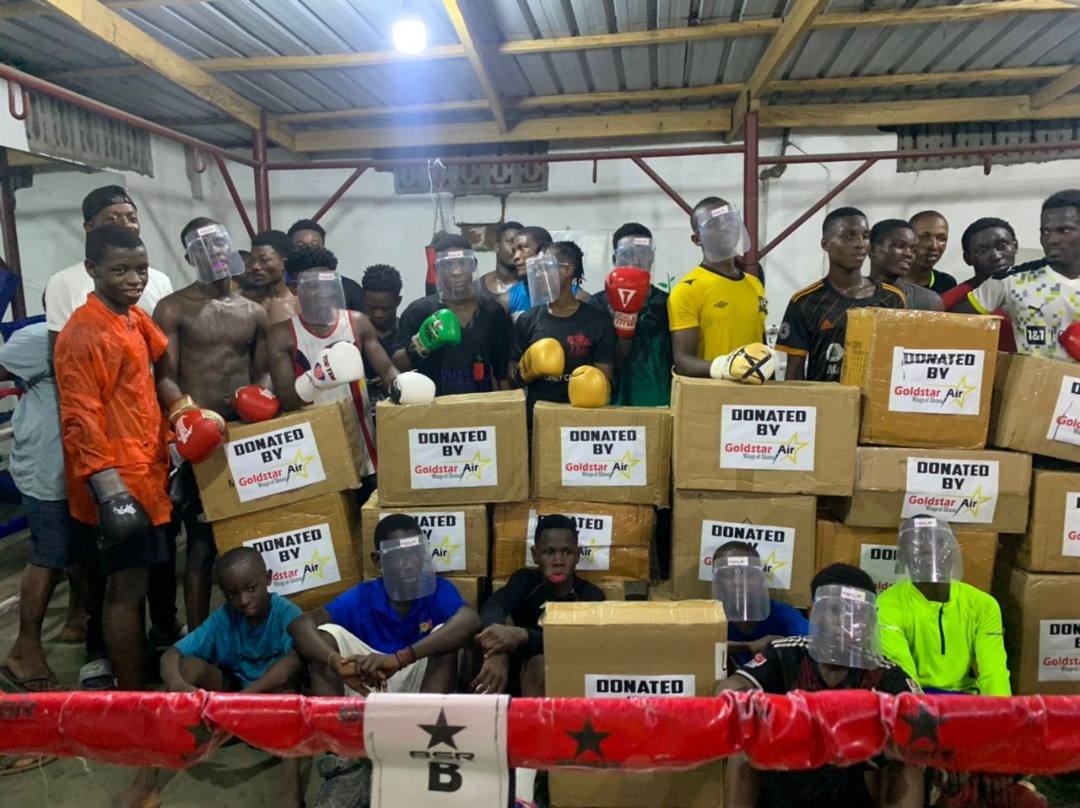 Goldstar Air, the 2021 Most Promising Airline of the Year, has made a special donation to the Wisdom Boxing Gym and SM Boxing Management in order to revitalize juvenile and professional boxing in Ghana.

SM Boxing Management is a professional boxing management company, owned by respected boxing matchmaker Mr. Solomon Otoo Lartey. The management company have mentored and organized fights for male and female boxers under its care, as well as other boxers to fight within Ghana and outside. Recently on March 25th 2022, Mr Otoo had four boxers on Lasgidi Pugilists Park Four(4)Bill at Yucateco Arena, Plot 700 Igbe Igbogbo Road, Ikorodu Lagos, Nigeria.
Wisdom Boxing Gym is an Educational Fitness Institution that uses physical fitness and boxing to transform the lives and bodies of all types of people and was founded by award winning boxing coach Dr. Ofori Asare in 1993 with three boxers (Tony Danso; Ben Odametey and Gideon Annor). Ashiakwei Aryee and others followed the premier team. Since its inception, the institution has trained over 500 boxers who have represented Ghana and won medals at various national and international tournaments.

The Gym has three main programs: Boxing Training, Personal Fitness, and Group Customized Boot Camps and several boxers from the gym have represented Ghana many times at the African, Commonwealth and Olympics Games as well as appeared in the World Professional Boxing Rankings and have competed for world titles.
The facility currently has 30 amateur boxers, 10 professional boxers, including Bastie ‘The Beast’ Samir, Alligator, and 7 coaches. Other members work in administrative departments. They intend to expand into regions both within and outside of Ghana in the near future.

Dr. Asare has toured and taught in other countries as an AIBA accredited international coaching instructor.
The presentation was made by Mr. Edwin Lamptey and Mr. Isaac Tetteh, both crew members of Goldstar Air at the Wisdom Boxing Gym, East Legon and was warmly welcomed by Coach Dr Ofori Asare, the Managing Coach at the Wisdom Gym. He is also the Technical Director of the Ghana Boxing Federation, a four-time Olympian, and the coach who led Ghana’s Black Bombers to a medal at the Tokyo 2020 Olympic Games.

Mr. Edwin Lamptey said after the donation that, when the company starts operations, they intend to use their platform to sell Ghana to the rest of the world, and boxing is one of the key avenues through which they intend to do so.

He further noted that the support given to the clubs are not a one day wonder but it’s to start a relationship that will be beneficial to both parties.

Dr. Asare thanked Goldstar Air for the timely contribution and the airline’s management for their support. This thoughtful act and gift will go a long way toward assisting these youngsters. Best wishes for the future success and generosity of the Goldstar Air Care Foundation, as you have made a huge impact in the lives of people in need.
Goldstar Air recently supported the Chorkor Champs Boxing Club as part of its corporate social responsibility, with the purpose of rejuvenating juvenile boxing in Ghana. Mr. Bernard Armah, a former boxer and now coach, formed Chorkor Champs Boxing Club in 2019 with the purpose of fostering fresh talent in the province which is able assisted by his competent assistants, Mr. Seth Aryeetey (Manager) and Derrick Kotey (Ambition Boxing Promoter).

The Boxing Club observed that there are a considerable number of youngsters aged 6 to 18 who live on the streets, and Goldstar Air has chosen to assist them in attaining their full potential. Since 2019, they have fought in a variety of contests, including the prestigious Besesaka tournament, where they won the best boxer award.
Mr. Dennis Kwarbeng of Goldstar Air stated after the donation that it is intended to supplement The Chorkor Boxing Club and assured the boxing club that the airline will assist them with boxing equipment and free tickets for the boxers to train outside the country as soon as we start operations.
Goldstar Air intends to construct a cargo village and a city project called “Goldstar City,” which will encapsulate a training school for engineers, pilots, cabin crew, and other airline staff. A career in aviation, particularly as a pilot, is a dream for many people, so the Flight School, which we are looking forward to being approved by the Ghana Civil Aviation Authority (GCAA), the Federal Aviation Administration (FAA), and the European Union Aviation Safety (EASA), will help some Ghanaians realize their dreams.

Tamale’s Cargo Village will offer a variety of freighting, warehousing, and customs clearance services – all from a centralized location – and it can also accommodate freight arriving from various modes of transportation such as road, rail, and air, which is unloaded, collected, prepared, and reloaded for onward transportation. By providing high-quality services to its partners, the village aspires to become one of Ghana’s most important economic engines in the cargo and logistics industries. The cargo village will handle a large portion of the region’s air carrier market and hopes to attract more strategic investors to achieve its planned growth.

Goldstar Air will also organize charter flights for Ghanaians to and from Tamale to the Kingdom of Saudi Arabia for the annual Hajj pilgrimage, as well as other Muslims across Africa, and for this project, the airline will train more Ghanaian pilots and cabin crew who will be on call and work on a contract basis whenever a charter service is available or as and when our fleet expands.