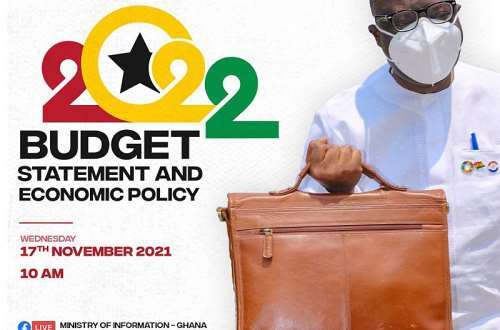 Finance Minister Ken Ofori-Atta has revealed that it will undertake prudent measures in place to empower private sector.

Presenting 2022 Budget Statement and Economic Policy/FiscalPolicy Statement to parliament on Wednesday November 2021 in Accra-Ghana, Ken Ofori-Atta said ” Mr. Speaker, Ours is the private sector development. We will ensure business-friendly environment and policy. We’ll ensure our youth are job creators not job seekers”.

“Government has abolished all tolls on public roads. Government to digitise health records of Ghanaians”, he said.

According to Finance Minister Ken Ofori-Atta, government intends to construct multipurpose sports facilities at Borteyman in Accra and 5 interchanges in Greater Accra and Kumasi Metropolitan area”.

Meanwhile, government has introduced Electionic Transaction Levy of 1. 75% . That is Momo tax has been successfully introduced ( E-levy).

Benchmark discount on goods and cars reviewed.
Prices of General Good will go up by 30%
And used cars by 20 to 25%.

Reacting to the new E-levy, Former Deputy Power Minister John Jinapor insists “Minority Caucus of parliament will not approve imposition of new taxes on Ghanaians who are already burdened with hardships.

According to Minority Spokesperson on Finance Dr. Cassiel Ato Forson, Ghana’s public debt stock is projected to hit GHC 355 billion by the end of December 2021, which 82% of debt to GDP ratio.

He noted that Ghana’s debt to GDP ratio will hit 90% by 2023, adding that the 2022 Budget will impose worsening hardships on Ghanaians.

In a sharp rebuttal, Deputy Majority Leader said ” NPP Government has demonstrated competence to the management of the Ghaianan economy”.

1.Increased VAT by 5% and this affected all items (through the decoupling of NHIL and GETFund Levies)

6. 5% National Fiscal Stabilization Levy (should have expired in December,2017 but was extended indefinitely making it a new tax)

8. Increased ESLA by 30% and extended it for another 15 years

11. Financial Sector Levy of 5% on all Banks

12. Price Stabilization and Recovery Levy on fuel increase by 40%

13. The Unified Petroleum Pricing Formula has been increased by 164%

14. BOST margin has increased from 3 Pesewas to 9 Pesewas representing 200% increase.

15. The fuel marking margin levy has also been increased by another 233%

16. Reversal of Benchmark Values discounts which will lead to a 25-30% increase in prices of imported items.