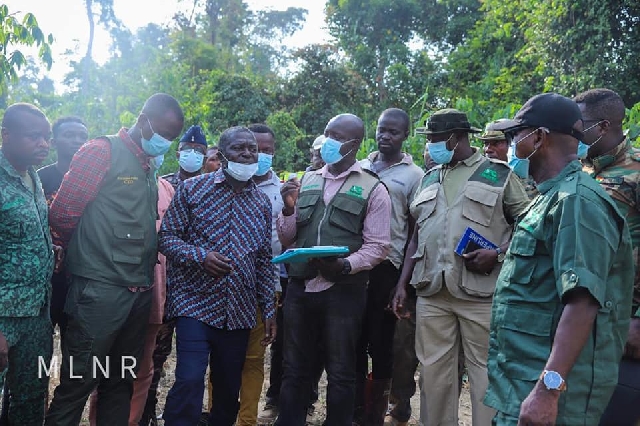 Deputy Minister of Lands and Natural Resources, Mr Benito Owusu-Bio has said the government will undertake further investigations into the circumstances leading to a clash between the youth of Manso-Aboaboso in the Amansie South District of the Ashanti Region and security personnel of Kingsperp Mining firm stationed in the community.

The probe follows the burning of two excavators and one Nissan pickup truck belonging to the company and the injury of a community member on Saturday, January 1, 2022.

Mr Owusu-Bio, who led a fact-finding mission on Wednesday, 5 January 2022, to ascertain the veracity of the incident, reaffirmed the government’s resolve to deploy the Operation Halt II taskforce to clampdown on all illegalities in forest reserves and water bodies across all mining districts.

He asked the mining company to, as a matter of urgency, cease all forms of mining activities but was quick to add that the firm can engage personnel to guard their equipment.

Mr Owusu-Bio also touched on the efforts by the government to reclaim mined-out areas, saying, “mined-out areas in the Apaparama and the Oda forest reserves will be reclaimed to restore sanity and water flow, especially the Oda river area where this mining activity is taking place”.

“We are here today to confirm the situation and identify the security risk involve and engage with you on the possible way forward,” he indicated.

The Deputy Lands Minister also reminded the District Security Council (DISEC) of their role as arrowheads, in the enforcement of security in their jurisdiction, adding that much is expected of the Council in that regard.

He also called for calm between the community and the security personnel of the mining company and charged them to eschew acts that hinder peaceful coexistence.

The District Chief Executive of Amansie South, Mr Clement Opoku Gyamfi, expressed his appreciation to members of the DISEC for their swift intervention, which prevented further escalation of the situation.