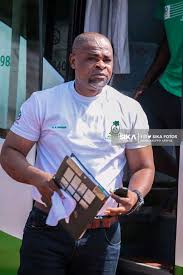 GPL: It was a difficult game- Liberty Coach Andi Sinasson

Liberty Professionals Coach, Andi Sinasson says it was a difficult game yesterday at Dansoman Carl Reindorf Stadium as his side faced Accra Hearts of Oak.

Speaking in an interview monitored by African Editors on 11 July 2021, the Head Coach of the Dansoman Boys expressed difficulty that greeted the game and the muscle of his side to obtain a an equaliser.

Meanwhile, Liberty, his side has suffered in the League battling to swim out of relegation.

Its  game with Hearts of Oak was a decider. However, Liberty picked a point to escape from relegation but must win their next match to stamp it.