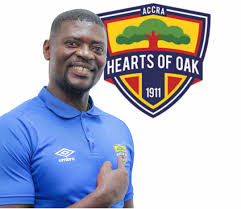 Head Coach of Accra Hearts of Oak Samuel Boadu says the Ghanaian Premier League has not ended since his side is left with a match at Sogakope with Wafa.

Speaking in an interview monitored by African Editors, on 11 July 2021, Mr. Boadu expressed dissatisfaction at their draw game with Liberty.

However, he has congratulated his team for putting up a strong fight and splendid performance during the last but one encounter with Liberty Professionals.

Meanwhile, its arc rival, Kumasi  Asante Kotoko, had resorted to crawling after it took a one goal defeat from Hearts in a Super Clash at Accra Sports Stadium.