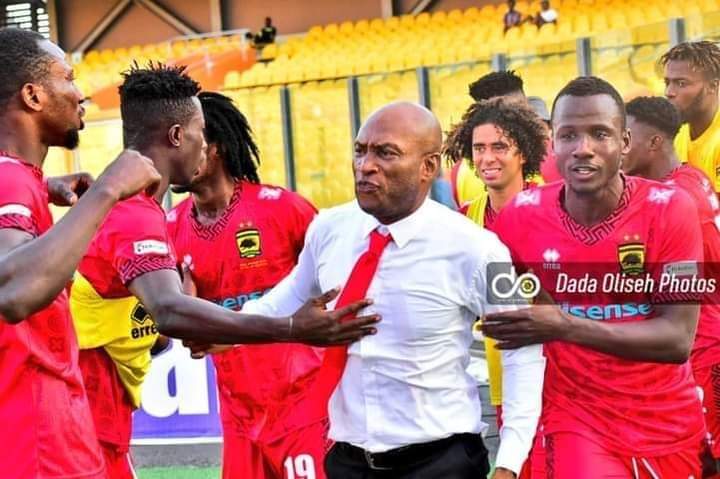 The reigning Ghana Premier Champions Accra Hearts of Oak, is still struggling to replicate the last season form after playing four matches without a win, while their arch rivals, Kumasi Asante Kotoko has gone four matches with a clean sheets, without dropping a point.

On Saturday, Kotoko continued with their splended performance at the Baba Yara stadium by defeating Eleven Wonders by 2-0. Samuel Boaten and Isaac Oppong (Sunyani Neymar) were the goals scorers.

Aduana Stars after a poor run of matches bounced back strongly to defeat Real Tamale United(RTU) by 5-1. Bright Adjei broke the deadlock in the 7th minute, but Stephen Badu concealed it in the 25th minute. Erik Kwakwa put the home side again in the 66th minute, Yahaya Mohammed made it 3 in the 76th minute, Yussif Mohammed score an own goal and Bright Adjei got his second and Fifth for Aduana stars.

Accra Lions also locked horns with Bechem United at the Accra Stadium, where the Lions won by 2-1. Christopher Acheampong and Salifu Rauf scored for Accra Lions before Augustine Okra got the consolation for the visitors.

On Sunday, Hearts recorded their first defeat of the season after they beaten 2-0 by AshGold at Obuasi. It was a difficult first half, but a determined AshGold opened the scoring in the 53rd-minute courtesy Yaw Annor. Abdul Salem sealed the victory for the miners with his 92nd minute gaol to make it 2-0.

Accra Great Olympics came from 3goals down to drawn with Dreams FC at the Accra Stadium. Black Star player Philimon Baffour draw the first blood in the 5th minutes, Fatawu Issahaku made it 3goals in the 15th 27th minute. Maxwell Abbey Quaye brings hopes back after scoring from a penalty kick in the 34th minute. Maxwell got his second on the day in the 62nd minute before Samuel Armah scored in the 84th minute to end the game at 3-3.

Medeama and Karela was rained off in the 70th minute.

In this article:: Hearts still without win after wk4,GPL WK4 wrap,Kotoko maintains 100% record.