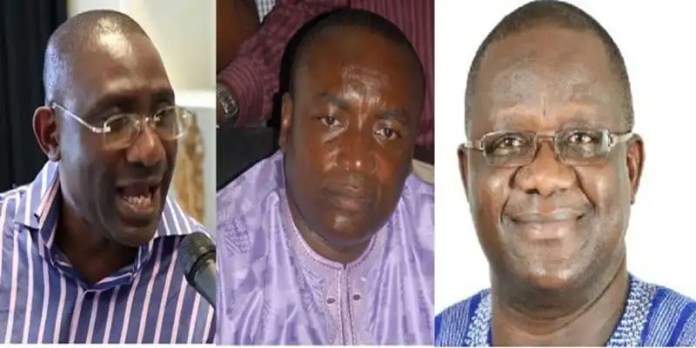 I don’t believe reasons for suspension of Afoko, others – Dr. Nyaho Tamakloe

Founding Member of New Patriotic Party(NPP) Dr. Nyaho Nyaho Tamakloe has disclosed that he is yet to be convinced about the reasons for the suspension of former National Chairman of the party, Mr. Paul Awentami Afoko, and other national executives prior to 2016 general elections.

Nyaho-Tameklo is of the view that the suspension of Mr. Afoko and two others were not in line with the constitution suspecting there was a grand agenda to boot them out of office.

“Till today, the reasons are given for their suspension, I don’t believe it. I came out to condemn it and the party deemed it as unconstitutional and if these executives have violated the constitution, they should allow the constitution to deal with it.” Dr. Nyaho-Tamakloe disclosed in a one-on-one interview with Metro TV’s Bridget Otoo.

The NPP suspended its 2nd Vice Chairman, Sammy Crabbe, alongside Mr. Agyapong in 2015, after they were accused of publicly rebelling against the party’s decision to indefinitely suspend its National Chairman, Paul Afoko.

But Engineer Kwabena Agyepong recently opened up about issues that led to his suspension as a member of the governing New Patriotic Party(NPP).

He disclosed that people who petitioned for his removal were faceless; an indication that it was orchestrated by people who saw him as a threat.

“It was unfortunate, you talk about confusion and all that. I didn’t instigate any confusion at all at our party. I think some people felt that I was trying to remove the carpet from under their feet.

I was disappointed that people couldn’t stand up and … those who petitioned against me, where are they? They were never there”, he noted.