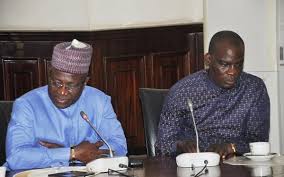 ‘If e-levy has been approved, implement it’- NDC MP to ‘hot and cold’ blowing Kyei-Mensah-Bonsu

The Minority in Parliament has described as laughable claims by the ‘hot and cold blowing’ Majority Leader and Minister of Parliamentary Affairs, Osei Kyei-Mensah-Bonsu that the controversial e-levy has been approved at the committee level and the motion for appropriation has started.

At a capacity-building workshop organized for the Majority Caucus in Parliament and some Ministers of State on Saturday, 22 January 2022, Mr. Kyei-Mensah-Bonsu said “It is a difficulty for me when people are kicking against the E-levy when you know that in the adoption of the motion to approve the budget, we approved of that.

“So, it means that the first step has already been surmounted.”

“Then the E-levy has been factored into the various estimates that we have approved for all the sectors”, he explained.

Speaking in an interview monitored by on Monday, 24 January 2022, he said “If you are a politician, you must be consistent in all your actions at all times,” adding that “if the Majority Leader is asserting that E-levy has been passed, they should go ahead and implement the policy”.

“Nothing has been approved in relation to the E-levy,” the NDC MP stated.

According to the lawmaker, the majority leader is a very confused person who must not be taken seriously.

“At the committee level, the E-levy was approved by a majority vote and not by unanimous decision,” he revealed.

“What transpired at the committee level, was that members took the decision to vote and there was a tie. The Chairman of the Committee had a casting vote so he voted for the numbers to be 13 for the Majority and 12 for the Minority”

He added that there was no unanimous decision arrived at the committee level.

He said in principle, the budget may have been passed but as part of the tax law, there must be a tax bill laid before Parliament so the E-levy has not been laid on the floor.

He advised that the E-levy can be approved if the Majority in Parliament eat humble pie by withdrawing the old E-levy and revising it and relay it before Parliament.

Parliament will resume sitting on Tuesday 25 January, 2022 and the E-levy bill is expected to feature prominently in proceedings.