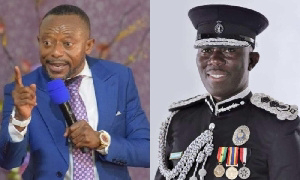 Founder and Leader of Glorious Word Power Ministry International Rev. Isaac Owusu- Bempah has called on the Inspector-General of Police (IGP) Dr. George Akuffo Dampare to organize a meeting with prophets if he needs in-depth knowledge on prophecies.

He contends that it’s only a meeting with Prophets that will provide the Police Chief a proper understanding of their work of prophets.

Rev. Owusu-Bempah made this known whilst speaking to his congregation on New Year’s eve.

He said “I will like to appeal to the IGP that if he needs briefings on the prophetic ministry he should invite some of us, not pastors who do not believe in prophecies”.

The founder of the Glorious Word Power Ministry International who is known for his doom prophecies over the years could not prophesy on December 31, 2021 for fear of going contrary to the caution put in place by the Police.

“It is also a crime for a person, by means of electronic communications service, to knowingly send a communication that is false or misleading and likely to prejudice the efficiency of life saving service or to endanger the safety of any person,” the statement signed by Superintendent Alexander Obeng, the Director of Public Affairs of the Ghana Police Service, added.

“A person found guilty under these laws could be liable to a term of imprisonment of up to five years”.

The Inspector-General of Police a few days after taking over as the IGP was faced with a challenge of dealing with prophecies.

Shatta Wale faked that he had been attacked by gunmen after a Prophet called Jesus Ahuofe said he was going to die.

This led to the arrest of the musician and the Prophet; a case which is still pending in the court of law. The IGP as a result organized a meeting with Church leaders and also educated them on what the law says about their activities.

The Police subsequently issued a statement on December 27, 2021 cautioning against all prophecies that will contravene the law.

According to Owusu-Bempah, the IGP should focus on his core mandate of fighting crime.