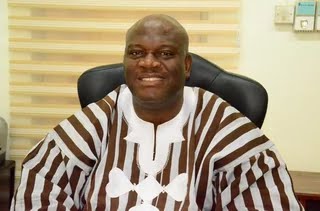 A joint Security Taskforce has today, protected traders at Agbogbloshie market from thieves as they relocate to Adjen Kotoku in Amasaman.

There was a near chaotic clash early hours of the day with disgruntled youth burning tyres to drive home their disapproval of the latest relocation of onion sellers to Adjen Kotoku area. The near pandemonium was put under control when security officials led by Kwesi Ofori stormed the scene to restore calmness, ensuring law and order.

The haven of business, has for a while been in the news for security reasons. Therefore, the joint security taskforce was at the scene to ward market women off theft.

The Operation’s Commander, Deputy Superintendent of Police, Kwesi  Ofori in an interview told African Editors that the crowd controlling strategies were necessitated due to some ” criminal elements” who tried to disrupt  normal business in the area.

Meanwhile, Greater Accra Regional Minister Henry Quartey engaged the market women and pointed out that they would be relocated to Adjen kotoku. Despite initial disagreement, a peaceful cooperation was reached bringing their eviction from Agbogbloshie to this day.