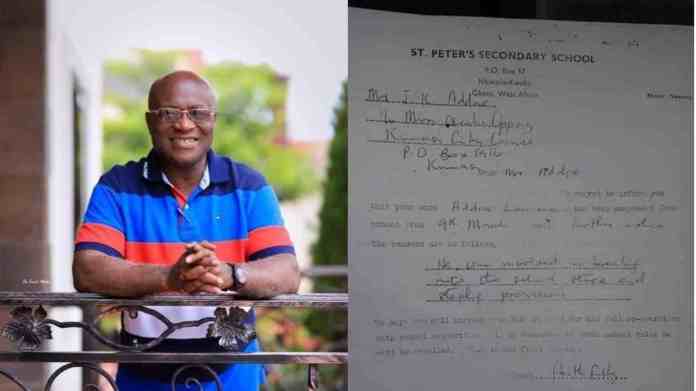 In what appears to be digging the skeleton in his cardboard, the dismissal letter to Osei Kyei-Mensah-Bonsu from St. Peter’s Secondary School has found its way in the internet revealing how the veciferous Paliametary Affairs Minister, Suame MP and Majority leader was shown the exit from the school for stealing.

Osei Kyei Mensah Bonsu who was then known as Lawrence Addae, broke into the school’s store to steal provisions for which he was dismissed until further notice.

A letter addressed to Mr. J.K Addae, father of Lawrence Addae Kyei Mensah Bonsu and signed by the then Assistant Headmaster of St. Peter’s Secondary School said the school regrets to inform the older Addae of the misconduct of his son which has led to his sack.

The crime was “breaking into the School Store and Stealing Provisions”.

He went to KNUST later where he studied Planning and earn a 3rd class the only degree he holds to date. After, KNUST, he couldn’t find a job so he started selling car parts in Suame-Magazine and rose to become Member of Parliament.

This is not the first time Osei Kyei Mensah Bonsu’s past had caught up with him.

Our readers will remember how General Secretary of the National Democratic Congress Asiedu Nketia made chilling revelations about Osei Kyei Mensah Bonsu’s past life which has made it difficult for him to be considered for Ministerial appointment since President Kufour’s time.

In the interview monitored by African Editors, Asiedu Nketia said this “dark” hidden past of Osei Kyei Mensah Bonsu is why he has always stayed in parliamentary leadership to serve his party without lobbying for ministerial appointment which will require him to be publicly vetted and where the issue could be used against him.

The Suame MP has been criticised by many for incompetence and total failure of his majority group-led leadership to build consensus with minority counterparts on the the passage of the controversial e-levy.

The proceedings to decide on whether the e-levy bill should be considered under the certificate of urgency turned chaotic after First Deputy Speaker Joseph Osei Owusu attempted to bend, relax the rules and vote, forcing parliament to adjourn sitting without a fixed date.