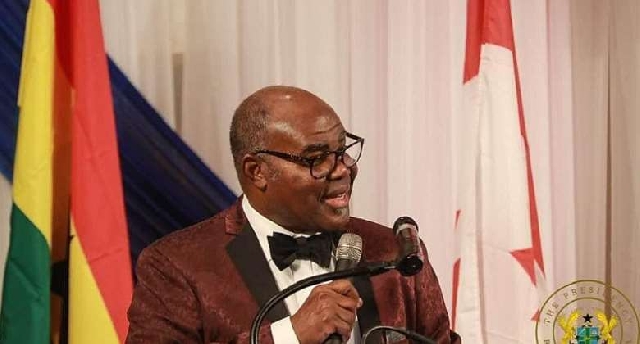 Former Attorney General and Minister of Justice, Nii Ayikoi Otoo, has joined the race to lead the governing New Patriotic Party as National Chairman ahead of the 2024 general elections.The decision by Ghana’s former High Commissioner to Canada is gaining momentum on social media through his supporters who are pushing his bid to replace Mr. Freddie Blay.

A WhatsApp platform known as ‘Ayikoi Otoo 4 National Chairman’ has been formed to lead the charge in rallying support for the former High Commissioner’s ambition.

The Spokesperson for the group, Mr. Kwame Sarpong, said they are using social media to garner support for Nii Ayikoi Otoo’s bid as they await the official opening of the contest by the national leadership of the NPP.

Though christened Joseph, he rarely uses that name.

He belongs to the New Patriotic political party.

He served as Attorney General and Minister of Justice of Ghana under the John Agyekum Kufuor Administration.

Nii Ayikoi Otoo was born in Mamprobi, a town in the Greater Accra Region of Ghana, to E. K. A. Otoo, a co-founder of Ebenezer Secondary School and Emelia Otoo.

Lawyer Nii Ayikoi Otoo was called to the Ghana Bar in 1981.

The lawyer did his one-year mandatory national service at ADB and then sojourned to Nigeria briefly from September 1982 to January 1983. He returned to Ghana to join his grand uncle’s Chambers Adamafio & Associates, a law firm in Accra where he worked for more than 20 years, rising, in the process, to become the Master of Chambers.

In the early 2000s, he started his own chambers called Otoo & Associates, Leo Chambers, at Larterbiokorshie in Accra.

He served as the Regional Secretary and later President of the Greater Accra Bar Association.

He was elected unopposed as the National Secretary of the Ghana Bar Association for three consecutive terms.

He served with his learned senior colleague Nana Akufo-Addo on the National Council of the Ghana Bar Association in their capacities as President and Secretary, respectively.

Ayikoi Otoo was appointed as the Attorney General and Minister of Justice by President John Agyekum Kufuor in 2005 to succeed Papa Owusu-Ankomah.

He was appointed Chairman of the Constitutional Committee of the New Patriotic Party in 2010 and served as a member of the party’s Vetting Committee that vetted the presidential hopefuls for the 2011 primaries.

He served as a Member of the Disciplinary Committee and National Elections Appeals Committee of the party. Nii Ayikoi Otoo swore in the newly-elected National Executives at the Tamale Stadium in 2012.

Ayikoi Otoo was also the Chairman of the Governance Sub-Committee of the Campaign Team and also chaired the Executive Assets Committee of the Transitional Team in 2017. In March 2017, President Nana Addo Dankwa Akufo-Addo appointed Ayikoi Otoo as Ghana’s High Commissioner to Canada.

He follows in the line of distinguished Ga Chairmen of the Party Peter Ala Adjetey, Samuel Odoi-Sykes and Jake Otanka Obetsebi-Lamptey.

The legal puritan Ayikoi Otoo won the hearts of many for good reason when he represented the then General Secretary of NPP now late Kwadwo Owusu Afriyie known in private life as Sir John, charged for contempt of court, displaying exceptional wisdom before Ghana’s Supreme Court panel presided by Justice Atuguba during 2013 election petition, succeeded in calming tempers and convincing the judges to temper justice with mercy arriving at decision that saved the situation.