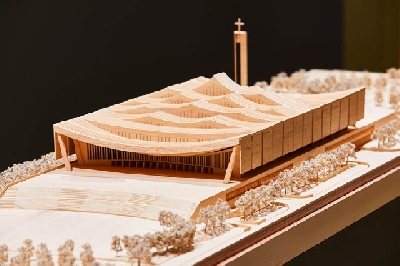 It has emerged that Ghana’s Finance Minister Ken Ofori-Atta has released an amount of 25 milion cedis to National Cathedral’s Secretariat as an additional seed money, absolutely at the blindside of Parliament, contrary to President Akufo-Addo’s declaration that the project will be funded with a private money, a development that has already received backlash from minority Caucus of the lawmaking chamber who believed that the action is awkward, perverse with little or no basis.

The opposition MP said: “This gross lack of priority cannot be pleasing to the compassionate God we all serve”.

“It is also important to stress that this manifestly insensitive conduct is without parliamentary approval — we shall be demanding urgent answers in Parliament”.

President Nana Addo Dankwa Akufo-Addo, in March 2020, said the proposed National Cathedral, which is being built in the heart of the city of Accra, will be one of the iconic structures on the African continent.

Addressing attendees of a ceremony at the construction site of the Cathedral to lay the foundation stone for the commencement of construction works, President Akufo-Addo said he is determined to lead the efforts aimed at ensuring the completion of the project in fulfilment of his pledge to God.

“As I indicated on 6th March 2017, upon completion, the National Cathedral is certainly going to be one of the iconic structures of the African Continent”, President Akufo-Addo said.

In his address, the President identified three main reasons behind his decision to mobilise support for the construction of the Cathedral.

Firstly, the President said, “since gaining our freedom from the colonial power sixty-three years ago on the 6th of March 1957, Ghana has so far been speared civil war, famine and epidemics”.

“We are certainly no better than the other nations in our neighbourhood who have been confronted with these challenges. I believe it is by the grace of God that we have been preserved and sustained. The construction of the Cathedral will be an act of thanksgiving to the Almighty for His blessings, grace, favour and mercies on our nation”, President Akufo-Addo said.

Secondly, President Akufo-Addo said, “seventy-one per cent of the Ghanaian people adhere to the Christian religion grouped under the various persuasions of the Christian Faith. The interdenominational National Cathedral will help unify the Christian community and thereby help promote national unity and social coercion”.

Lastly, President Akufo-Addo noted that he made a pledge to Almighty God that if He was gracious enough to make him President, he will help build a Cathedral to His glory and honour.

“I am determined to redeem this pledge”, President Akufo-Addo stated.

On March 6, 2017, President Akufo-Addo outdoored his vision for the construction of a National Cathedral to be sited close to the State House in Accra.

At the ground-breaking ceremony, the President described the proposed Cathedral as an interdenominational worship project which is also a thanksgiving gesture to God for the blessings bestowed on Ghana on the occasion of her 60th-anniversary.

The architectural and structural design of the National Cathedral was done by British-Ghanaian architect Sir David Adjaye, the founder and principal of Adjaye Associates.

The National Cathedral will house chapels and baptistery, a 5000-seater main auditorium which will be expandable to a 15,000-seater for national events and celebrations.

It will also include, among others, a grand central hall, a music school, and will house Africa’s first-ever Bible Museum and documentation centre.

According to the website of the National Cathedral, the project is a “historic” one that provides a “sacred space and infrastructure for the formal religious activities of the nation, like state funerals and presidential inaugural services”.

It is this national character that distinguishes it from the other Cathedrals in the country.​

“We are taking the bold vision of the President for a Sacred National infrastructure, linking it to the path-breaking design of iconic Architect Sir David Adjaye OBE, and organically anchoring these in world-class programmes – including Africa’s first Museum of the Bible whose development is supervised by Cary Summers, the founding President of the Museum of the Bible in Washington DC”.​

“We have engaged the very best of Ghana with the very best in the world. The result of the integration of the vision, design, and programming is an iconic infrastructure that provides a sacred space for the nation, attracts pilgrims and tourists, and includes a built-in economic engine for financial sustainability”, the website noted.

These principals frequently articulate proportion and orientation in multiples of twelve as a reference to the twelve apostles.

The National Cathedral’s draped roof form draws from the great symbols of the chieftaincy institution and culture, such as the opulent boaman ceremonial canopies and umbrellas, traditionally used to shade and protect royalty. The National Cathedral takes these symbols of royal and religious veneration ad democratises them from the individual to the people.

The Cathedral’s colour palette and Adinkra-influenced gardens express a natural harmony and countenance to both Christian orthodoxy and Ghanaian cultural traditions. Three main colours are utilized throughout the scheme. Red, black and white reference the Holy Trinity while speaking of the Ghanaian nation, Red represents the blood, black the spirit and heart, and white symbolises the power of the Ghanaian people.

Red has also been adopted for the new state ceremonial route connecting the Cathedral with Independence Square.

The national cathedral is a pledge President Nana Akufo-Addo made to his God.