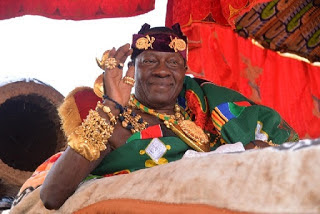 New Juabeng Traditional Council has officially informed the Education Directorate of the Final Funeral rites of the Late Daasebre Professor (Emeritus) Oti Boateng and Nana Yaa Daani II, New Juabenhene and Hema respectively, from Saturday, the 14th of May, 2022 to Monday the 16th of May 2022.

The Council indicated that the climax of the funeral period is Monday May 16th 2022.

“Subsequent to the above, the education Directorate writes, knowing well the curiosity and inquisitives of its pupils, to seek your permission to suspend all school sessions on the said day for public and private basic schools in the Municipality,” a statement signed by Victor deGraft-Etsison, Municipal Director of Education , New Juaben South, said.

There were plans to launch the celebration of his 30th anniversary on the stool next year.

He was a member of the Yiadom-Hwedie Royal Family of Juaben, Ashanti, and New Juaben. His mother was the queenmother of Juaben in Ashanti.

As a traditional ruler, Daasebre Oti Boateng strengthened the New Juaben Traditional Council as a local institution for the prosperity of the people.

He institutionalised the first traditional festival in post-independence Ghana – the Akwantukese or the Great Migration – which brings into contemporary prominence a missing but critical and major event of Asante history in Ghana.