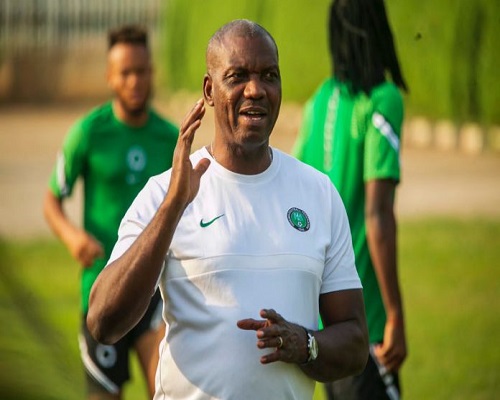 Nigeria’s senior national team is without a coach just two months before they face Ghana in decisive 2022 World Cup playoffs as Augustine Eguavoen resigned on Sunday after Super Eagles exit at the Round 16 at the African Cup of Nations.

Nigeria were defeated 1-0 by the Carthage Eagles in the 2021 Africa Cup of Nations round of 16 clash in Garoua which promoted the former internatonal defender to throw in the towel.

Eguavoen had led the three-time champions to three straight wins against Egypt, Sudan and Guinea-Bissau sparking hopes that the Super Eagles were coasting to their fourth title.

But, they were shockingly booted out of the competition by Tunisia side that has been negatively affected by Covid-19 outbreak among their squad that left their squad weakened but still managed to eliminate the African giants which prompted Eguavoen to fall on his sword.

Eguavoen said in a post match press conference that “I will go back to my position and allow the NFF (to) make a decision on the way forward”.

Eguavoen was appointed as the interim coach of the Super Eagles after Gernot Rohr was sacked last month and the team’s group stage performance prompted calls for him to be made the permanent coach.

The NFF had already named Jose Peseiro as the new permanent coach of the Super Eagles before the AFCON started in Cameroon.

Nigeria will face Ghana in March in two World Cup playoff matches to decide one of the five African slots at the tournament to be played in Qatar.