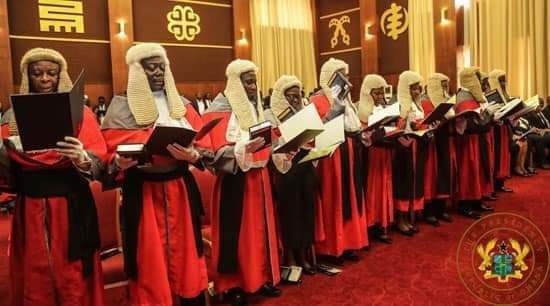 National Communication Officer for the National Democratic Congress, Sammy Gyamfi has stated that: “Folks, the patently unconstitutional, illogical and absurd decision by the Supreme Court to the effect that a Deputy Speaker while presiding over Parliament can vote, has a very interesting operational condition attached to it that is worthy of note.

“In view of the foregoing, we are compelled by the Constitution to hold that a Deputy Speaker or person presiding does not lose their right to vote when they are presiding over the proceedings of Parliament. *It must be emphasized however that the procedural and or operational rules to practicalise the protection of this constitutional right in a member presiding in the absence of a Speaker and his or her duty to represent his or her constituents in the vote and decision are MATTERS WITHIN THE EXCLUSIVE DOMAIN OF PARLIAMENT ITSELF. PARLIAMENT MAY ACHIEVE THIS BY AMENDING ITS ORDERS OR ADOPTING PARLIAMENTARY PRACTICES TO GIVE EFFECT TO THIS CONSTITUTIONAL IMPERATIVE”. (Emphasis mine)

It is very clear from the above, that until Parliament itself amend its standing orders or adopt new parliamentary practices and/or procedural or operational rules to implement the absurd decision of the Supreme Court that a Deputy Speaker can vote while presiding, NO DEPUTY SPEAKER CAN VOTE IN THE HOUSE.
Now let’s see how the Attorney General and Minister for Injustice, Godfred Yeboah Dame will get the Rt. Hon. Speaker and the fearless and gallant 137 NDC members of Parliament to do this .

I shall return with my substantive views on the judgement itself.