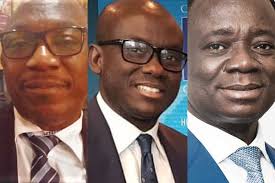 It has emerged that the trial of Former COCOBOD Chief Executive Officer Dr. Stephen Opuni and Businessman Seidu Agongo has been adjourned to 17 January 2022 solely because of the breakdown of the court system during proceedings on Monday, January 10, 2022.

Dr. Stephen Opuni and Agongo are facing 27 charges of causing financial loss to the state in the purchase of agrochemicals for COCOBOD. They have been standing trial since 2017.

The accused persons have pleaded not guilty to all the charges.

During Monday’s hearing, Presiding Judge Clemence Honyenuga announced to the court: “There is a problem and the whole system is down and I don’t know when it might be on for us to work, so, it has to be adjourned”.

The Supreme Court Justice who is sitting as an additional high court judge said: “It is nobody’s fault and we don’t know when it will be on; so, having heard about the enormity of the problem, we have to come next Monday and let’s see how far things will go.”

The second and third accused persons’ lawyers, however, indicated to the court that they intended to file separate motions which have been billed for January 21.

Also, Dr. Opuni’s lawyer, Mr Samuel Cudjoe, indicated that his client had filed a motion to invoke the supervisory jurisdiction of the Supreme Court for certiorari which has been scheduled for February 8, 2022.

In this article:compels judge to adjourn to Jan. 17,Court system breakdown,Opuni trial: