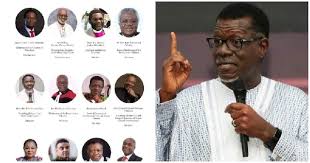 Founder of the International Central Gospel Church (ICGC) Pastor Mensa Otabil has had his photograph removed from the Board of Trustees on the website of government’s national cathedral project.

Pastor Otabil who was a member of the Board of Trustees of the national, according to the Member of Parliament (MP) for North Tongu Samuel Okudzeto Ablakwa, was removed from the website on the night of Tuesday, 14 June 2022.

Government had earlier asserted that Pastor Otabil was still a member of the Board of Trustees, despite claims by the North Tongu MP that he had resigned.

In a facebook post on Wednesday, 15 June 2022, Mr Ablakwa wrote: “After exposing another layer of deception relating to the grossly misleading claim on the website of the national cathedral that Pastor Mensa Otabil was still a member of the Board of Trustees; I can now reveal that last night, Government quietly took out Pastor Otabil from the website.”

The North Tongu MP had said even though Pastor Mensa Otabil left the board of the national cathedral last year, the government has kept his name on the list of members of the board of trustees.

Government is well aware the revered Pastor Mensa Otabil has walked away from this cathedral project more than a year ago, and yet government continues to publish on its cathedral website (https://www.nationalcathedralghana.org/leadership) that Pastor Otabil is a member of the Board of Trustees”, the opposition MP said in a post on Facebook.

“Then the Executive Director of what has been presented as a private board of trustees, Dr. Paul Opoku-Mensah, is being paid by the taxpayer as a full-time public official under Article 71 conditions at the Office of the President according to page 15 of the 2021 Annual Report to Parliament on Presidential Office Staff”, he alleged, adding: “Let us fear God”.

Membership of the Board of Trustees for the National Cathedral has been updated to reflect the exit of Dr. Mensa Otabil, the Founder of the International Central Gospel Church (ICGC).

Checks on the National Cathedral’s website as of Wednesday, June 15, confirmed he is no longer part of the Trustees.

Membership of National Cathedral Board of Trustees amended to reflect Mensa Otabil’s exit Dr Mensa Otabil
It is unclear what might have necessitated his exit from the Board.

African Editors’ have confirmed that several attempts to get him to rescind his decision failed, leaving the Board with no choice but to amend the information on its website.

Speaking in an interview monitored by Mr. Ablakwa asserted that the desertion by the renowned preacher is due to the illegality being perpetrated by the Akufo-Addo government with respect to the project.

“There is quite an uneasy calm among the Board of Trustees. And I can confirm to you that one eminent priest has walked away from the Board; the revered Dr Mensa Otabil is no longer with them.

“The whole year, he has not attended any of their meetings. It is not clear what his intention was, but he has given indication that all is not well,” he told host Emefa Apawu on Sunday, June 12.

Membership of National Cathedral Board of Trustees amended to reflect Mensa Otabil’s exit. It is unclear what necessitated his exit from the Board
In recent times, the lawmaker has accused the government of siphoning public funds to facilitate a project it propagated as a personal and private pledge.

The North Tongu MP has put out documents showing that an amount of ¢200 million has been dished out for the construction of the project.

Membership of National Cathedral Board of Trustees amended to reflect Mensa Otabil’s exit. If what the North Tongu MP claims is anything to go by, it is likely other members of the Board may exit too, after Dr Otabil
These monies, he said, were dished out without recourse to parliamentary processes or strict public procurement practices.

The issue of the National Cathedral has been become topical on the airwaves after news broke that some GHC25 million has been released to the National Cathedral Secretariat as an additional seed money by the Finance Ministry, coupled with a whopping 37 million paid to Architect on the project apart from residence of some judges and Malian Ambassador demolished to pave way for the project in the capital, Accra.