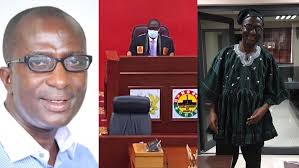 Parliament fails to conduct business due to lack of quorum

It has emerged that Parliament of Ghana failed to conduct business on Wednesday 10 November 2021 due to lack of quorum required by the standing orders of the lawmaking house.

Parliament was compelled under the circumstances to postpone proceedings to later date due to inability to form the required quorum of members present to transact parliamentary business.

The unexpected turn of event took place when Adaklu Member of Parliament Governs Kwame Agbodza drew the attention of the Second Deputy Speaker Andrew Asiamah that the chamber was unable to reach a quorum to transact parliamentary business as spelt out by the Standing Order 48, requesting for adjournment in order not set a bad precedent, forcing the Speaker to rule on the matter.

Deputy Majority Leader Alexander Afenyo Markin attempted to make a case that parliament is the master of its own rules but failed to convince the Speaker.

In view of this, the Speaker, puts on hold proceedings for an hour solely in a bid to that MPs will be whipped in line to converge in the chamber to ushering-in business of the day.

However, some hours after the house was called back, the chamber was unable to form a quorum. This gave upper hand and legitimate cause of action to the minority caucus led by Deputy Minority Leader Dr. James Klutse Avedzi to push for the house to adjourn in accordance with the rules of engagement, accusing the majority leadership of failing to treat the business of the house seriously.

Second Deputy Speaker, Andrew Asiamah whilst adjourning proceedings said I have counted several times but still we’re unable to form a quorum. Honourable members, the camera is on us and let’s take the business of the house serious.