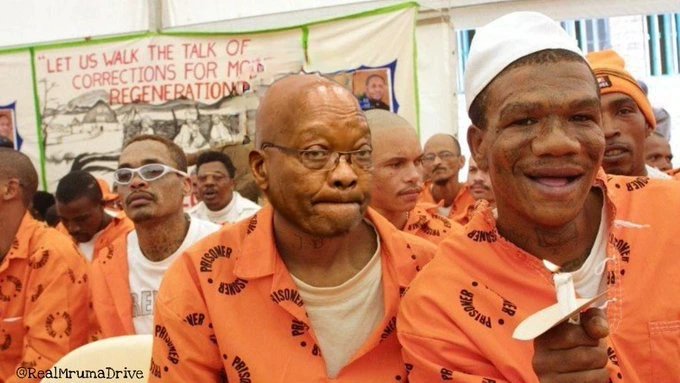 Former South African President Jacob Zuma has begun his days in prison custody at exactly Estcourt Correctional Facility in Kwazulu Natal, a province in South African (SA) after the SA Court slapped him with a-15 month jail term over contempt charges.

His Excellency Zuma initially told journalists that he would not show up for the jail term contrary to the South African court order.

Former South African president Jacob Zuma removes his eyeglasses as he addresses the media in his home in Nkandla, KwaZulu-Natal on July 4, 2021. – South Africa’s former president Jacob Zuma, ordered to surrender himself to start a 15-month jail term for contempt, said on July 4, 2021, he would not be doing so by the court-set deadline. “No need for me to go to jail today,” he told journalists at his Nkandla homestead in Kwa-Zulu Natal province, where hundreds of his supporters are camped outside in solidarity. (Photo by Emmanuel Croset / AFP) (Photo by EMMANUEL CROSET/AFP via Getty Images).

But, the former South African Leader Jacob Zuma later surrendered himself upon rising intense pressures, a situation that would have landed him in double trouble.

The Spokesperson of Estcourt Correctional Facility in Kwazulu Natal, a province in South Africa Singabakho Nxumalo has announced adequate preparness to ensure that Former President Jacob Zuma is safe whilst in custody.

Singabakho Nxumalo noted that “as a department we must ensure that he is safe and respond to his immediate needs”.

In a televised program monitored by African Editors on Thursday 8 July 2021, Singabakho Nxumalo the ” democracy of South Africa has been tested as the statesman bows to the decision of the Court”.