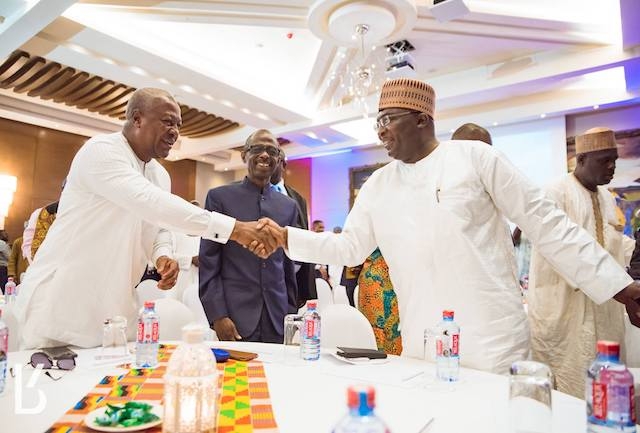 EX-President John Dramani Mahama has taken a swipe at Vice President Dr. Mahamudu Bawumia for his inability to gather courage and speak to the crippling Ghanaian economy due to his poor showing in the sector, accusing him of dishonestly and deliberately running away from bad economic records to self-styled ICT champion already achieved under NDC government.

He noted that “It is quite amusing though, that even as the economy faces these severe challenges requiring urgent action, those who have been responsible for the mess, have attempted to make a fluid transition from failed, self-styled economic messiahs of the very recent past, to overnight IT champions”.

Speaking on Social Justice and Sustainable Economy in Accra on Wednesday 10 November as part of the wraps up of his ‘Thank You Tour’ of the sixteen regions of Ghana after 2020 polls, John Mahama said “You can’t runaway from poor economic records to self-styled ICT champion. We have already built the ICT infrastructure of this country under my government”.

“Where’s your trumpeted technical know-how in economics? What happened to the mantra of competence?”, Mahama asked Bawumia.

John Mahama told Vice President Bawumia that “No amount of your attempt to runaway from your poor economic records to your non-existent achievements in digitisation you’re saddenly claiming can let Ghanains forget excruciating hardships you impossed on them including taxes”.

Former President has also stated that Ghana has witnessed ‘cronyism, corruption’ which has exposed the president’s failure to fight corruption. According to the former Ghaianan Leader John Mahama, major hindrances to mobilize resources to fund development is corruption under Akufo-Addo-Bawumia-led Administration.

He called on constitutional and state institutions to mindful of their mandate and not kowtow to the government’s propaganda and stay away from becoming propaganda tools of NPP government.

On unemployment, John Mahama described as dishonest the declaration by Finance Minister Ken Ofori-Atta that the government’s payroll is full and cannot employ additional job seekers.

“Don’t lose hope in Ghana, our country will be liberated in 2025 when the NDC assume power after 2020 polls. We’ll put proper and ensuring system in place to rescue Ghana “, he said.

The 2020 NDC Flagbearer John Mahama also called on President Akufo-Addo and his appointees to stop luxurious travels at expense of the poor taxpayers.

For Mahama,”the luxurious travels and the display of opulence at the expense of the poor taxpayers must stop”.

He noted that “NPP is engaged in PR government. If you tell Ghanains to tighten their belts, you must first tighten you own and not the luxurious travels that we have seen under Akufo-Akufo”.

In a sharp reaction to refusal to admit the 499 law students, the EX-President Mahama insists government and the General Legal Council are simply unfair to the 499 LLB holders.

For Mahama, ” You promised to admit a lots of LLB holders into the Ghana School of Law during electioneering campaigns ahead of 2020 polls, just because the NDC profferred solutions that will settle the matter only to turn them down after the election. That’s unfair to the 499 law students”.