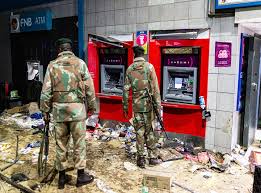 South Africa’s  looting and violence protest has  entered the sixth day forcing the Army to step in to clamp down on the unlawful burning of Shopping Malls, a potential threats to already Covid19 hard-hit national economy

In a televised program monitored by African Editors on Thursday 15 July 2021, the social disturbance which started on  Friday 9 July 2021 as some youth perceived to be fans of Former President Jacob Zuma hit the streets of Cyril Ramaphosa-led country destroying Shopping Malls particularly in Durban of Kwazulu Natal Province with other Provinces having similar experience.

Officials figures from South Africa  Consumer Goods Regulatory Body indicates that 800 shops have been plundered;with 72 people dead ;whereas 1200 are in the custody of Police .