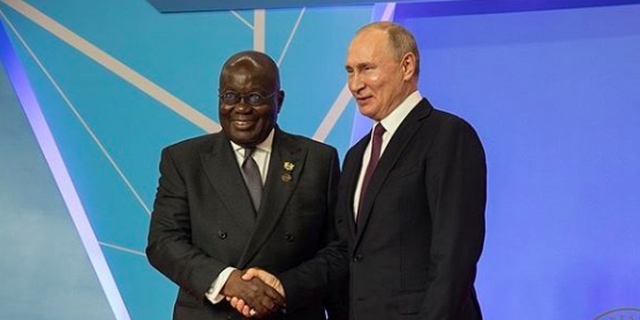 “Your economy was already failing; don’t blame crisis on our 2-month-old war with Ukraine”, Russia Embassy has told Akufo-Addo-Bawumia-led Administration.

The government of Russia has said the Akufo-Addo government cannot blame the war in Ukraine for Ghana’s current economic crisis.
pic.twitter.com/2TLkjMXg3r

A few days ago, Ghana’s Vice-President, Dr Mahamudu Bawumia, said the Russian-Ukraine war has had a direct adverse impact on the West African country’s economy.

Speaking at the TESCON Conference 2022 organised in collaboration with the Danquah Institute at the Pentecost Conference Centre at the Millennium City in Kasoa in the Central Region on Thursday, 7 April 2022, Dr Bawumia said: “The increase in commodity prices has been exacerbated by the Russia-Ukraine conflict. Russia and Ukraine together account for 30 per cent of the global wheat export. The longer the conflict the greater will be the disruptions to global food supply. The conflict is also likely to slow global growth”.

“Russia accounts for some 30 per cent of Ghana’s imported grains, 50 per cent of flour and 39 per cent of fertiliser. So, we are directly affected by the Russia-Ukraine war. Unfortunately, we do not know when it will be over.”

He also added: “The global increase in fuel prices is causing hardship.”

In a series of tweets, however, the Embassy of Russia in Ghana said: “The current situation in the food markets is not a result of two months of this year, but a steady trend of at least two years. Food prices started rising in mid-2020 and reached an all-time high in February 2022”.

“This is a real market shock caused by high demand and rising prices on food, raw materials, and transportation services, including freight, in the post-Covid recovery period,” the Embassy tweeted.

Recent reports have indicated that about 10,000 people have lost their lives following the Russia-Ukraine war.

In this article:- Embassy to Akufo-Addo,not cause of Ghana's economic crisis,Russia-Ukraine war