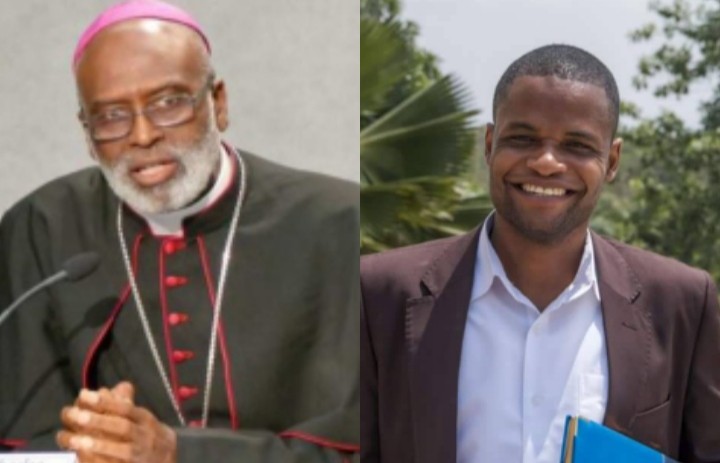 Firebrand Bono Regional Youth Organizer of National Democratic Congress, NDC, Efo Worlanyo Tsekpo has subtly reminded the Vice-Chairman of the Board of Trustees of the National Cathedral and Metropolitan Archbishop of Cape Coast Most Rev. Charles Gabriel Palmer-Buckle that the Terbenacle builder Moses was not LGBTQ+ – homosexuality– gayism, lesbianism and corruption promoter.

The latest sharp rebuttal from the outspoken NDC loyalist follows Most Rev. Palmer-Buckle’s on Ghanaians particularly Christendom, the practitioners of the Christian faith to donate for the establishment of the National Cathedral despite the excruciating hardships, hunger, unbearable fuel prices and structural inequality where President Akufo-Addo increased his own salary by 79% but 4% for public sector workers.

According to Most Rev. Palmer-Buckle “the argument against this cathedral has been that, there is hardship and people are hungry so forth and so forth. But when God instructed Moses to build the Tabernacle for God, Israelites were on dessert, didn’t have what to eat but they contributed and contributed so much that it exceeded expectation in building the Tabernacle.”

In a sharp rebuttal, Efo Tsekpo said “Moses who built the tebernacle for God as referenced by Palmer-Buckle, did not promote LGBTQ+, collapse people’s businesses to make them poor”.

According to Efo Tsekpo, Moses the Archbishop was using to persuade poor Ghanaians to contribute towards the establishment of the National Cathedral did not terrorize his people with the army, live luxurious life, and was not corrupt, “so God was happy with him when he decided to lead his people to build a terbenacle for him.”

“Your Holiness, Your sheep are hungry, they are dying, they are unemployed and all we could hear is that they should ignore their hunger and unemployment status, the unbearable hardship they are going through which the Catholic Bishop Conference echoed to government recently and still contribute to build a cathedral…?” he asked

Tsekpo further stated that “Youngmen in Techiman, Banda, Nkrankwanta who were killed during 2020 polls, parents did not hear a word from you. Your holiness, they were ignored, they went through the pain alone. Mother Theresa said we should feed the poor, help the sick, comfort those who are sad. She didn’t asked us to tax them while they are going through all these pains to build a cathedral for God that is even someone’s personal pledge to God.”

Efo Tsekpo noted that families of those who were killed during the 2020 general elections can’t even feed themselves because their breadwinners were killed and “all we could tell them is for them to ignore their hardship, forget their pain and contribute to a personal pledge of building a cathedral that the murderer of these people made to God.”

For Efo Tsekpo, God himself will not be happy to hear this from his Shepherd because the Bible states that a Shepherd should care for his sheep — and even if just one of the sheeps is lost the Shepherd must go and look for it.

He stated that, unfortunately for Ghanaians, eight (8) of these sheep who were murdered during the 2020 elections but the Shepherd never cared.

According to him, “God will be happy for us to build more hospitals to save COVID-19 patients (His sheep,) and Shepherds like John Dramani Mahama built the magnificent GA East Hospital where you ( Palmer-Buckle) gave your testimony as COVID-19 survivor.”

“We were told by the Bible that when Moses was with the Israelites on the desert in the wilderness, they were never hungry because God fed them with manna free of charge and protected them with pillars of clouds during the day and pillars of fire during at night so that no murderer could kill eight of them like it happened under Nana Akufo-Addo, So they had a sound mind to contribute in building the Terbenacle for God,” he drew the attention of Most Rev. Palmer-Buckle.