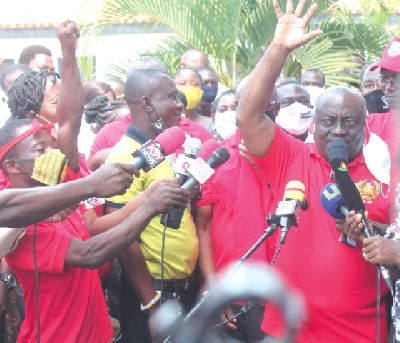 Teachers Education Workers Union (TEWU), whose members comprising cooks, cleaners, bursars, administrators, accountants, auditors, among others, has called off its nationwide strike after a meeting with stakeholders to discuss their grievances.

TEWU declared a strike effective Wednesday, 5 January 2022 over the nonpayment of their professional development allowance.

However, the General Secretary of TEWU, Mark Dankyira Korankye, said a committee has been set up to deliberate on their grievances.

“The strike has been put on hold pending the committee’s work. If the committee completes its work and we have a favourable response, we will look at that but if the response is not favourable, we will resume our strike. We expect that they will expedite whatever action there is and finish it on time,” he said.

Almost a year ago, TEWU went on a similar strike on Wednesday, 13 January 2021 over the government’s failure to finalise their conditions of service.

According to TEWU, their strike, at the time, was due to the inability of the Fair Wages and Salaries Commission (FWSC) to conclude negotiations with them following engagements in June 2020 on the review of conditions of service for unionised staff of the public universities, which expired in 2008.

TEWU local chair at the Kwame Nkrumah University of Science and Technology (KNUST), Mr Charles Arthur, told Class News at the time that they would only call off their strike when their demands were met.

He said: “We’re beginning a full-blown nationwide strike in all public universities in Ghana, it’s going to be simultaneous at 10 am”.

“We’ll declare strike for every member to go home. As we speak now, we’ve not heard anything from Fair Wages and our decision still stands that Wednesday God willing we are embarking on an industrial action i.e. strike.”

Mr Arthur noted that all efforts to get the FWSC to the negotiation table has proved futile.

They later called off the strike after five days.