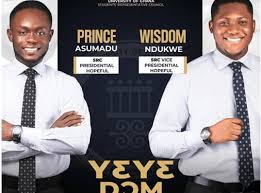 University of Ghana SRC President-Elect Prince Asumadu has dragged the Vice Chancellor of the school and three others before court over 2021 election dispute.

It is important to anchor the point that it is the second time within two months, Ghana’s premier University has been involved in a legal tussle after two students separately initiated an action to legally nail some book runners of the university over SRC elections.

SRC President-Elect, Prince Asumadu, also a 4th-year student, has sued the Vice-Chancellor of the University of Ghana, the Dean of Student Affairs, the SRC Electoral Commissioner and the Registrar over the just-ended SRC election.

He was declared winner at the end of the race.

Two months after the election, Prince Asumadu and his Vice, Wisdom Ndukwe as well as two other elected SRC officers are yet to be sworn in.

The Student Representative Council is currently being led by a National Service person in an acting capacity.

This is due to a challenge mounted by the defeated candidate in the election who alleged irregularities at some polling stations.

Samuel Amos Ofosu mounted the challenge first at the Dean of Students office and then later at the Judicial Board of the SRC.

Dean of Student Affairs of the University, Professor Alufa Bopkin constituted a committee to investigate the allegations and make recommendations. The Committee is yet to present its report.

Meanwhile, the second challenge mounted at the SRC Judicial Board was adjudicated with the student court ordering a rerun at the Mensah Sarbah and Akuafo Halls polling stations. Both polling stations were won by the plaintiff in this suit, Prince Asumadu.

Prince Asumadu and his running mate have labelled the judgment as a travesty of justice for two reasons. First, they claim the election petition to the SRC Judicial Board was not filed within the 48-hour duration after the declaration of the results.

Secondly, they say the SRC court as presently constituted is unconstitutional because some of the members are no longer students, having completed their programmes at the University of Ghana and currently at the Ghana School of Law for their professional course, a position affirmed by the University of Ghana’s office of legal counsel in an opinion on the matter.

Prince Asumadu in his suit filed at the Accra High Court is asking for eight reliefs including an order directed at the respondents to swear him in as president.

Prince Asumadu avers through his lawyer, Andrew Nii Agyei Khartey that the Dean of Student Affairs is seeking to subvert the will of the students of the University of Ghana and wants the court to remedy it.

The second suit against the University in relation to student elections is one involving a final year student Caleb Kadu who has also sued the Vice-Chancellor, the Dean of Students and others over his disqualification to contest in the Alex Adum Kwapong JCR election earlier this year. The case is still pending before an Accra High Court.